Get There By TeraS

A mask and horns do not a Succubi costume make

A Review of The Succubus’ Sub – Session Seven: Changes by John Dylena 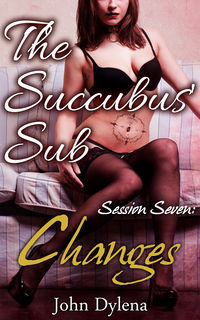 Sometimes a Mistress needs to show her submissive that there is more to life than what they have seen so far. The question that comes from that is… What do they do with that knowledge and where does it lead them next?

The morning after another night bound in latex, Brett wakes up and finds himself back in his apartment, his body still female and as tempting as ever. Soon after he wakes up, he receives a phone call from his mistress with instructions to wear the outfit set aside for him.

His place is empty, his furniture gone. Myserra is moving him out and into the new condo that they’ll be sharing together.

And every luxury home needs a maid.

The story makes a turn right from the beginning that I didn’t expect to see. There really wasn’t a hint, for me at least, of what it was or where it was eventually to lead to. It was well done and fit into the past of the story and where it seemed to be moving towards well. The twist, when it arrives, is surprising, but the aftereffects of it do carry on and that I think is a good thing as, in truth, all characters need to grow and Brett/Brooke I think needs to do the most growing.

When the truths do appear, and Myserra leads Brett onwards in his experiences, it makes a good deal of sense of why things are as they are and where things are meant to move onwards to. There is also a moment between Brett and Myserra where Brett admits a very important truth to himself and his Mistress that I think needs to be explored further and there is a reason for that.

I’m still a little unsure about Myserra’s attitude towards Brett/Brooke. She hints at her feelings, but brushes them off many times which, at least for me, seems to be not quite right. Devotion should be rewarded and somehow I don’t think it has been so far. They say that absence makes the heart grow fonder and for Brett that’s very true. It is also true that with discipline there needs to be a reward or it does not hold or mean anything. I hope that Myserra sees that before Brett finds himself/herself in a situation that could change their relationship.

Which brings me to Heather. Heather is, well, not the smartest of Succubi it seems and whether her attitude towards Brett is a measure of her desires to have him or to control him or, perhaps, to take him is something that I can’t quite follow at times. She should have figured out by now that disobeying Myserra is a bad idea and yet she’s still attracted to Brett and Brooke even more. It feels like she sees Brett as a pet and not a sub and I think she’s missing the point in that. It would be interesting for her to use some honey instead of vinegar in her dealings with Brett/Brooke. After the events in this part of the story I wonder if she will figure that out or need to learn a real lesson… Or if she tries to take Brett away or something else… It’s the something else that I wonder about most of all.

As for Brett himself, his view of the world is shifting to be more… Brooke-like shall we say and I rather like the transformation as it progresses. Brooke the maid has some interesting moments, but for me at least I thought the opening few paragraphs… and the outfit that Brooke wears to work, were really very interesting. I would like to see more of Brooke as “Brooke”, perhaps with her internal definition of herself being… herself. Brooke, for me, is interesting and where that story leads to I think can be a lot more than has been seen so far. We’ve seen the fantasy… I wonder about the impending reality for her.

The story is well done, the scenes and settings are vivid and the erotica has a lovely touch of heat to it in the right places. A couple of very minor editing errors towards the end of the story were noticeable, but overall that did not take away from my enjoyment of the story. As a bridge from the past to the future I think this works well. It sets up many questions and paths for the story to take and I look forward to seeing where it goes next.

An interesting interlude from what was to what might be… And I really must try to find that outfit that Brooke… “wore” to the “office” sometime… I rather liked that a lot. Something is coming and it is heading directly towards Brett. It will be, I am sure, interesting when it arrives.