Get There By TeraS

A Review of Succubus Redemption by Susan Woodward 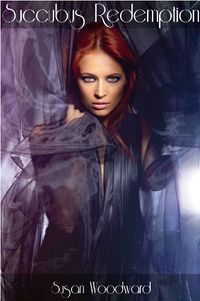 It is said, in some myths about Succubi, that becoming one is a curse. That your existence is held with taking from another until they are no more. While that is the most common aspect of the Succubus mythos… It is not, by any means, the only one.

Telling a story about Succubi, in a way that really is quite a bit different than the norm is a talent. Making the characters within the work truly exist is a more rare one that isn’t seen often. But when it happens it makes for a story that is more than the heat within it…

This is the story of:

Succubus Redemption is a story where a young woman cursed long ago to the loneliness of the dream world must survive on her own. Stripped of the memories of her previous life except for the affair that lead to her curse, she doesn’t even know her own name. The curse forces her to answer to whatever name the man of the moment bestows upon her.

Her curse makes her wander the world seducing dreaming men and feeding on their chi. It’s a case of a girl’s gotta do what a girl’s gotta do, or at least it was until she met Taylor. He’s strong, dominant, and the man she believes she has waited an eternity for.

Things are just beginning to heat up when Taylor’s dad becomes ill. She watches helplessly from the dream world unable to help him. Will Taylor say the three words that can break her curse and allow her to renter the waking world or will he just be another notch on her bed post?

The Succubus of this story is not, by any means, stereotypical and from the first moment her story is told I found myself liking her, fearing for her, and most of all, sad for all that she had been through. But most of all, the loss of her own identity, her self, her name… That was worst of all. Still in spite of all that she had lost, there is a spark of hope within her and tied into that hope is something very precious… love.

She loves Taylor. Not just the Taylor of his dreams, but the real world Taylor as well. She frets over him, worries when she cannot do anything to help him. She faces an Incubus who wants her, but she not him and when Taylor begins to slip away due to their influence, the heartache she feels is strongly told within the story.

She is under a curse, a very evil one really. One that can be broken with three little words, but the thing is, as a Succubus… she never hears them. It was telling how much she wants to explain, to have him say the words and not hear them. There is love between them in dreams even when Taylor changes in his desires, but she remains true to him.

After the climax of the story, when something precious is given to her, there is an open door that the story really needed to take, but did not. Actually more than one, and in that I felt a bit let down when what I hoped was to be… wasn’t. I’d love to see another part to this story. Something to give it the closure that I think the Succubus and Taylor both need…

The heat in the story, at least the beginning, is a bit “over the top” in nature, but then it was a dream and so that was what it was. It was the moment when things changed, when Taylor’s reality came to be that the true heat, love and passions in the story appeared and they were wonderful…

As much as I loved the story and the characters, I think this work could have used at least one more editing pass for some silly little errors that appear here and there. For most they might not even notice them, but for me they drew me from the story on several occasions and I wish that they did not do so…

A number of spelling and grammar mistakes were unfortunate, they did pull me out of the story at moments that I really didn’t want to be. But a Succubus that I very much do like and one I would like to see where her story ends up. She has an important gift, the path ahead is the one that needs to be seen.