Succubi Image of the Week 325

A Review of Malena’s Kiss by Paul DiPersio 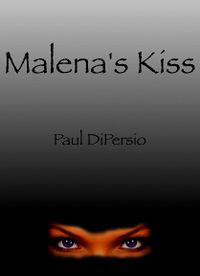 Not all works have what I define as Succubi appearing in them. Sometimes there are glimmers of them, slight and fleeting while around them is cloaked something… different.

It is the creation of that difference, the history behind that difference that can make or break the story. Beyond that, how that being is brought into the “normal” world matters. And what they do to it most of all.

Jim Francis just inherited a house from his late Aunt Margaret; a monstrous, dilapidated, 18th century New England Colonial … in some creepy backwoods town called Cutler Hollow. Deep in the belly of the overflowing septic pit he uncovers a black iron chest, sealed with a lock, bound in chains, and inscribed with bizarre Celtic symbols. He raises the chest with dreams of gold coins, precious jewels, and sterling silverware.

This work tends to be more horror overall, but it is not just a horror story on its own. There is an underlying story told about many characters through Malena herself. Malena isn’t exactly a Succubus, though in some aspects she is in a way. Still, the story, isn’t so much about her as those that made her what she is. The story connects the dots overtime, and the revelation when it arrives neatly draws the story towards its conclusion.

There isn’t much in the way of erotica in this work to be seen. It has a voice, one that has a lot of sadness, regret and loss within it that removes the possibly of other things having a place in this work. Unlike many other works that attempt to use horror as a story telling device, here there are moments of horror, but they do not overcome the story at its core. It is not horror without purpose or action without goal. It is, in a sense, a reflection of one man’s soul being tormented by circumstance and action.

There are moments in the work where Malena’s powers are very clear and in others it is not quite so much so. Regardless of that, her effects on the town, and a few unlucky persons therein, are very unique and quite different than what I have seen in similar beings that appear in stories that attempt to exist in this sort of theme.

The writing is very focused on story, emotion, and giving rise to the effects of one’s actions. There is very little wasted in the way of scenes or thought which keeps the work moving well. The main problem for me was that the horror aspect was a bit more than I enjoy and with that there were questions about Malena that were left unanswered which bothered me to a point. The work came to a close in a way that made sense and allowed for the characters that survived to continue their lives… But also a slight opening as well which gave me some pause.

I felt as if there was about one chapter missing in the work which falls just before Jim and an ally must face Malena. A fleshing out of purpose and meaning is the best way I can explain it as Malena herself puts little voice to what she is, but her actions are quite clear…

Do not expect erotica, do expect a story that tells of the horrors within a soul and what they can bring when they come alive… In that is a very telling story told.