Not so much a Dark Demon really as a costume

A Review of The Demon’s Price by Chew Toy 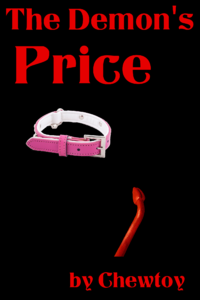 The Demon’s Price by Chew Toy

This is the third and final of three book reviews of the Demon Summoning Made Easy series by the author Chew Toy. You can find the previous reviews here and here as well.

I will right off the top say that I feel that this story is the strongest of the three. There is a lot of character development, a good deal of mind control erotica and, most importantly to me, the Succubus has a name… which is something that I felt was lacking in the previous works. But she does have one… Finally…

The third work is:

The handy demon-summoning guide from The Demon’s Gift and The Demon’s Curse makes its way to a high school nerd who wishes he had more experience with girls. Bob happily loses his virginity to the succubus. But soon finds himself losing other things as well…

Bob finds the book and summons a Succubus who is every bit the living and breathing person that the book promised she would be. She’s seductive, powerful, and in her own way very much a dangerous being to get involved with. Bob does get involved… quite intimately… and thinks that he has covered all of the bases with the Succubus. The thing is, for Bob, Succubi know how to make deals and they always have fine print that you never considered when you agreed to the deal you are offered.

Bob is the one that names the Succubus and he gives her the name Nina which actually made me smile as one of the things that I have noticed is just how many Succubi have their last names end in ‘a’ but I digress. Nina is everything that I expect in a Succubus. She’s seductive, she has quite a lot of magnetism around her, and she knows how to play with mortals to make them do her bidding… whether they know it or not.

What I particularly enjoyed was how Nina used her powers to first seduce Bob and then ever so quietly and gently whisper thoughts and ideas. She did not use mind control as a hammer, but just nudged Bob here and there until she got what she wanted from him.

Along with the mind control aspects, which were very well done and had lovely heat in them, there also are moments when the story touches upon one of the myths around Succubi and Incubi in that they can switch genders or sometimes merge them together. It is something that isn’t seen very much in stories about Succubi and it was handled very well, was very hot, and I rather enjoyed the scene as it unfolded.

The ending of the work was a bit telegraphed through the story, but not overly so. When it did arrive, it made perfect sense with how Nina was portrayed. The only real problem I had with this work is that it ends on a bit of a cliff-hanger. How it ends, where Bob and another find themselves is for me quite delicious and speaks to my own Domme nature. But it is the open door at the end of the work that makes me wonder what comes next, but is never seen.

The best of the three by far, a well crafted story with a Succubus that I felt was a good example of one. Not over the top, not stereotypical and most importantly… She has a plan and uses it to her advantage… It would have been nice to see where things went from here, but the story ends at a point where I wish that it didn’t. Perhaps Nina will reappear sometime…