Succubi Image of the Week 324

A Review of A Deal with a Demon by Victoria Brice 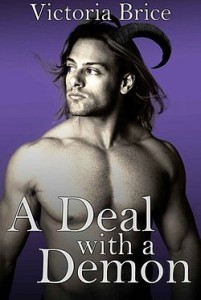 A Deal with a Demon by Victoria Brice

An Incubus story this time to review. Rather a short one but I try to give every work I find with a Succubus or an Incubus in it a chance. I do, truly, prefer ones that aren’t all sex, whatever kind that is it’s not that important. But it would be nice if two things happened besides that. One, something over 10 pages at least for what I have to pay for it and second don’t end the story with a hand wave just when it gets interesting. This work disappoints me on two of those three points regretfully.

Max is a powerful psychic and the newest recruit of ASEC, a supernatural law enforcement agency. Unfortunately, he’s treated as a glorified secretary until the night his boss calls on him to interrogate a captured incubus, believing that as a male he will be immune to the creature’s charms. There’s only one problem: Max is secretly bisexual! Will he be able to resist the demon’s seduction and earn a true place in the agency, or will he just get screwed?

It’s actually an interesting premise for a story and the idea is fleshed out well enough in the first page or so that you know something larger is going on, but we don’t find out a lot about it. After the introduction to Max, he’s thrown into the deep end of the pool with the Incubus and things go out of control from there.

I’ll say that the moments that Max “sees” into the Incubus are well done and what happens between himself and the Incubus is hot as well. But the thing is… It’s too short. There’s an obvious hook in what happens right at the beginning which isn’t explored and the ending, while not totally unexpected is a problem in that the story looks ready to move on… and it doesn’t.

It’s not a cliffhanger, not close to it, but it’s the promise of there being more that isn’t explored here. I do realize that the point of this work was the sex scene between Max and the Incubus and the story is peripheral  to that for the most part, but there is a lot of background that is told and not used.

To be honest, the background was more interesting than either of Max or the Incubus and if the author ever gets back to this in some way they should build on this work on the story side and then continue the story with Max and the Incubus.

Teasing a story isn’t the best thing to do, especially when it’s a work of erotica.

Much too short for what I paid for it which was more disappointing in that a story started, was going someplace interesting and then it just stopped. It’s frustrating to me at least especially when the next part of the story seems obvious enough and it could have gone there without a lot of effort.