A RealmLabs Special Report by James

A costume that is Devilish and a Delight?

A Review of The Demon’s Curse by Chew Toy 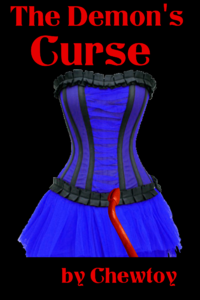 The Demon’s Curse by Chew Toy

This is the second of three book reviews of the Demon Summoning Made Easy series by the author Chew Toy. You can find the previous review here and next Tuesday will be the last review in this series.

In the second work one thing is made very clear. One should never underestimate a Succubus… Between Incubi and Succubi, Succubi are the ones to watch out for. Especially when you are seeking to use them. For they have every intention to use you instead…

Being dumped sucks. What if you could summon a demon to curse the girl who stole your boyfriend? Valerie’s sure the book “Demon Summoning Made Easy” is just a joke. But if it did work, she knows who she would send it after. She’d have it tempt and corrupt Lily Ranier until everyone saw what a slut she really was. That’s only fair, isn’t it?

Valerie finds the book that ties this series together and gathers her sonority together to see if the summoning can really make a demon appear. She does manage to summon a Succubus, one with black horns and tail, and when Valerie is asked what she wants, decides that she wants revenge on Lily, the girl that “took” her boyfriend. The thing is, when making a deal with a Succubus, one should always be very precise about what you want and what you will have to give up in return… and Valerie isn’t.

I have to say that I wanted to see more about the Succubus herself, but really she is a means to an end in the story and as such we never learn her name or really anything about her. She drives the changes to Lily, and in the end she takes her price from those that summoned her. I do like how she is described, the tone of her voice and her attitude. She makes her quite an interesting Succubus, but that’s the real problem. As much as she is interesting, as much as how she uses her powers to change Lily and so on, there isn’t a lot to tell about her. I would have liked to know more than just the description or her actions. Her personality isn’t quite there for all else and I found I missed that about her.

Setting that aside, Lily’s transformation scene is nicely hot and there is quite a hint about what the Succubus intends to do with her within it. Once that scene passes by, Lily’s mental and physical changes are subtle and that makes what happens quite a lot hotter as the story continues. There is, of course, quite a lot of sex in the story. Lily has her way with many partners and with that comes an interesting means of control that she has over them. It is one that I though was used well and made a good deal of sense.

The erotica is nicely hot and the mind control aspects that appear make it quite a lot more so. There isn’t a lot of character development, save for Lily’s changes, and that is something that could have been a bit better dealt with considering all of the changes that Lily made to those around her. Valerie doesn’t change much through the story, her only focus being on getting back at Lily. To be honest, I didn’t care for Valerie from the start, there is one line that just made me sigh and continue on. It may well have been there to make the reader dislike her and if it was, it really did for me.

I found that compared to the first work in the series, this one seemed to have the Succubus appear more than the Incubus did. It is only a bit more, but I found that in doing so the story came together better. It seemed that the Succubus had a plan and intended to use Lily for that purpose while in the previous book the Incubus was present for but a moment physically. In both works though their powers were quite clearly in force. Perhaps having them be more “active” in the story than they are would be a better approach? Still, the result of the Succubus, or the Incubus for that matter, in the work is one of giving someone what they say they want but in a way that gives the Succubus, in this case, what she wants.

Well written again, and the work builds nicely upon the first book. You need not read both stories to be able to jump into this work which is a nice touch. I feel that the second work is better than the first by a shade however.

A nice little hot flash with a Succubus that I would have liked to know more about. Some nice mind control scenes and a hot little transformation sequence that works really well…