A Review of I, Succubus by Lara Waters

Succubi Image of the Week 322

So if this is a Demon Costume where are the horns? 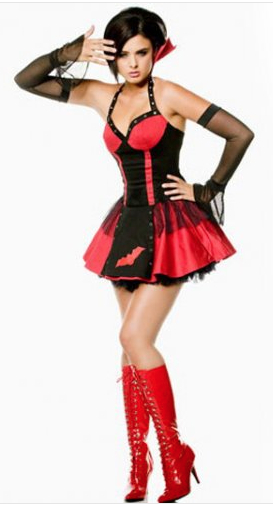 It is starting to become something of a habit in advertising I think where they call a costume devil or demon in some way in order to sell it. That’s not a problem really, but, when a costume is defined as such wouldn’t it be a great idea to actually have some horns at least with the costume?

In this case, that didn’t happen. Not that it would help this costume at all really but still… This is called the Woman’s Demon Costume and it comes with… well. again this is an example of a costume with no details at all about it, and that’s becoming a problem too I think. I can say that this sells for $55 US however.

I’ll guess that the boots are not included, which is a shame really because I do like them, but all else is and that means that horrid bat on the front of the skirt comes with this costume.

This is, really, a vampire costume, but of course the description of this disaster I think was designed to direct google hits to it.

I wouldn’t buy this less wear it. Vampiric Succubi do not do anything for me. This costume does nothing for me. Even adding a pair of horns to this and removing that awful bat on the skirt can’t help this to be better in anyway.

I know this isn’t a Succubus costume, or a devil one for that matter. I just wanted to note the lengths to which some retailers go to sell something this bad…