Succubi Image of the Week 321 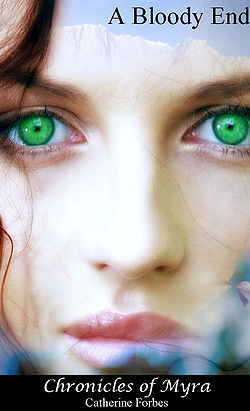 A Bloody End – Chronicles of Myra by Catherine Forbes

Honour. Trust. Belief. Three things that are, at least to me, important to see in a Succubus, whomever, whenever, or whatever she is. More so if she is the Mistress of others or in any way, shape, or form, having a place of power or responsibility. The one thing that is telling most of all is, however, when one they care for is no more, how do they respond? Are they simply evil or are they something more than that?

What if the question becomes less about what happened and why it happened than, in fact, who was involved in it?

It’s an important thought if you think about it. More so if you are the one that must decide what is right or wrong and why, in the end, it matters to you.

Introducing Myra – mistress and succubus. Seducing men is what she does best, but when one of her girls is murdered, seduction is the last thing on her mind. Instead, she sets out to punish the man responsible.

The setting of this story is a bit unclear, but, it is a world of supernatural beings, a Succubus and at least one vampire at least, though I have to assume there are more in the shadows. It’s also a bit unclear when in time this story is set, though I think it would be in the early 19th century based on the use of candles and the “feeling” that this world gives me.

There is a murder, a brutal one which is the catalyst of the story, but it isn’t really the point of the story. The point is to show the reader a little of who, and what, Myra is. Now as far as I am concerned, she is a Succubus, but not a stereotypical one thankfully. There are moments in the story where she fights her nature, which I thought were well done. It also was a nice touch that her “girls” who she once describes as her “pets” are connected to her. That allows for the story to progress to what is, really, and expected ending.

The one thing that bothers me is that there is a wonderful introduction, the building of Myra and her girls is rich in detail, and Myra’s evening with a certain someone tells us so much about her. But then after the murder, the chase is too short and the ending, when it arrives, is so quick that it feels like the author just decided for the story to end suddenly. That was the one disappointing point in this work.

Otherwise, I haven’t seen anything else from this author in this universe since and that’s a real shame. The hook of this story is wonderful and where the story goes from here I would love to know…

Really an amazing beginning to a series with a lot of promise for what is there to see. The only problem is that nothing came after and that’s a shame for all of what, and who Myra seems to be. While I have my thoughts about that, the only thing that matters is that she cares, deeply, about those she calls hers. I rather like that…