This costume needs some help…

A Review of Consumed by Felicia Fox 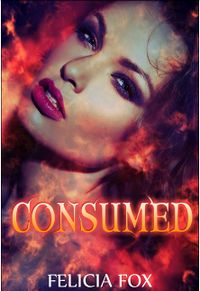 Many see Succubi as being temptation or fantasy or even, on occasion, the one lover that they will never be able to possess. What if that was turned around slightly. What if you are the one they see as being what they desire more than life itself but they know, truly, they can never possess you. What happens then?

More, what happens when you need them every bit as much as they do you and they have to say goodbye… What happens then? Can you? Can they? It’s a question that brings with it more questions than answers by far…

Felicity has never met someone like Alex before. Alex literally glows from their lovemaking. For the first time, Felicity is in love, but the woman she’s spent the last two months with may not actually be a woman at all. Felicity knows that Alex is something more, but she doesn’t know exactly what. Allowing Alex into her life might be the worst mistake she’s ever made.

Felicity is enraptured by Alexandra and she knows it. She can feel how her body aches at Alex’s voice, her touch, the teasing glances and more. Felicity also knows that there is something not quite human about Alex as well. Being taken away from one place to another in a split second and then being ravished by a woman that knows… well… exactly what she desires makes that very clear. Felicity has the perfect lover… but even the perfect lover has a flaw and that causes problems that neither of them expected.

Alexandra is a Succubus, of that there is no doubt at all. She’s seductive, powerful, dominant and uses her abilities to wring out every little bit of passion and pleasure from Felicity as the story unfolds. We never see her with horns, tail or wings, but she is described as being otherworldly beautiful with eyes that reflect her feelings as they change. She is so very possessive over Felicity, to the point where anything can happen between them and does.

Being so, at one point she makes a decision about Felicity that hurts them both, for the better Alex thinks at the time, but finds that once you have someone, once you know they are the one, you are every bit as much theirs and nothing in the universe can change that. When this unfolds there is a new layer of their relationship that rekindles the heart in the story and it really becomes something amazing to read.

Overall I really do like Alex very much, blonde and all, but the one part of the story that bothered me a bit was the taking of blood between Alex and Felicity at one point in the story. Personally I dislike that happening as it seems like a mixing up of legends and I think it could have been left out without any issues for all of the other connections and entwinement that happens between the two of them.

While it is a short work, it isn’t a hot flash with no background within it. There is story, a very well told and powerful one which has a narration that just fits exactly right with all that happens in it. The story is not muted by the heat that comes within it and it does in fact really add to the work as a whole.

Really nothing about the work took me out of it, the writing is excellent, the characters strong and their passions are very clear. I would have loved the work to be longer, to have more time to see the before, the months where Felicity and Alex first met and what happened from that point forwards to where this story told the tale. That first time that Felicity was taken away would be interesting to see and I wish that could have been shown.

Wonderfully hot scenes with two characters that fit together perfectly, a story that plays with emotions, needs, and desires in a way that I really enjoyed. I hope that the ending, which leads to an obvious continuation of the story here, comes sooner rather than later because there are so many questions to be answered and I really want them to be… And seeing more of the passions within these pages can never be a bad thing…