A Review of Devour by Jacqueline Sweet 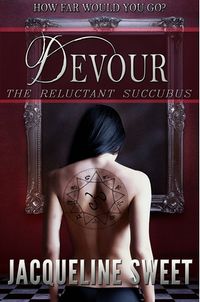 It is said, by some, that there is one thing each of us desires that we would do anything for. A single thought, desire, wish. Something that we know, deep inside, we can never have… or can we?

What if you were given that desire? What would be the cost? What sort of deal would you make for it? In the end the question becomes one that is more focused when what you are becomes what you desire to be… and what others desire of you…

A new series called The Reluctant Succubus began recently. The author, Jacqueline Sweet, has indicated that it will be a five part series and today I will be reviewing the first work in the series Devour with future reviews appearing as the series continues.

A mysterious ad promises instant weight loss at great cost, but only the worthy may apply. Sarah Mayhew jumps at the chance to finally attain the body of her dreams and finds herself caught up in a game of dominance with a hungry succubus. Can she find a way to break free or will she win a physique to die for and pay with her soul?

Sarah does not like herself all that much. When she sees an advertisement that promises her everything she wants, she tries to make it happen. Darkness arrives and offers her wish, a choice, and a fate. Sarah receives all three and then discovers that when you make a deal… it’s really never finished.

The being of darkness, really there isn’t any other good way to describe them, I thought had the right mix of evil, mystery and… I’ll use the word dominance I think. They were at one moment charming, in the next evil barely contained, and what I particular liked was the humour that drifted in and out of their conversation with Sarah. I’ll also add that, for me, the appearance of a single cupcake and what it represents, was deviously ironic. They set the tone of the series well I thought and I find myself wondering about them and if they might return when Sarah least expects them to.

Sarah’s personality and character is an interesting mix of submission and dominance which I think reflects who she seems to be. She wants to submit, to be changed, to become her desires, but at the same time she fights against that within herself. She could just give in, but she does not and that I found made me like her a lot more than I would have if she simply had given up. She’s intelligent, which was nice to see, and thinks… usually… before she acts. But now that she has her desire, the question is just how long she can keep that controlled… It will be a fight, on that point I have little doubt.

There is a Succubus in this work that Sarah encounters towards the latter third of the work. The Succubus isn’t quite stereotypical in nature however for many reasons. One is physical in nature, one seems to be very specific to Sarah herself, and a last is that what the Succubus can do is somewhat different than what you might expect. She is evil, of course, and the battle that Sarah faces has its lusts, wants and desires, some of which are within Sarah herself and some that are pressed upon her. Overall I thought the Succubus was interesting, though remaining unnamed, but for a good reason I think if the series goes in the direction I think it will. I didn’t care for her having hooves, one of my own personal peeves and not a criticism of the author herself. But her personality worked well for me and how she ensnared Sarah fit into the story very well.

The one thing that puzzled me somewhat was that Sarah had to jump through two “tests” and I’m not quite sure that needed to be. I do realize this work is setting up the rest of the series to come, and of course there has to be an origin to all good storytelling… It just felt to me as if there was a little too much “test” and not quite enough “consequence” in what transpired. However, I am quite sure that things will change as the story progresses forwards.

A good, solidly written work with really nothing that took me out of the story. I will admit that I winced a bit when the Succubus appeared with hooves, I really do not care for them, but that is my own personal bias. A touch of mind control hinted at which was well done. And I have to add that the appearance of a particular cupcake made me smile, but you will have to read the work to understand that reference. I would have liked to know more about the Succubus, the question that Sarah thinks about when she first encounters her is one that I think is a bit of foreshadowing of what is to come and getting from here to there will be something different I expect.

It is an interesting beginning to the series with quite a lot of introspection, self-examination and desire. I believe I see some foreshadowing within the work, and where the series goes from here I find to be intriguing. The balance of erotica to story was quite good and I hope that continues as the series goes on…

I will be following it to see…