Succubi Image of the Week 320

A Review of Session Five: Doubt & Discovery by John Dylena 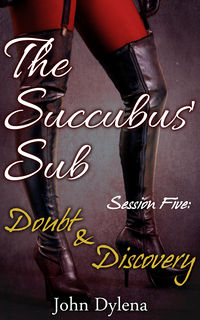 This review will be of the fifth, and at least for Part One of the series, last work in the series. I will also review the series as a whole at the end of this review of Part Five.

They say that the grass is always greener on the other side. But what if you could be on the other side of the fence and see exactly how green things were? What if what you believe to be your desire, want and need turned out to be something different than you expected? And what if, in the discovery of that difference, you find out that the owner of that particular desire has a secret of her own?

What would you decide then?

Brett wakes up the morning after another wonderful night with his mistress. After sending him back to his apartment, he finds himself thinking about the future. He weighs his options and realizing how he hates being away from Myserra, decides to ask her to enslave him.

But his succubus mistress senses doubt in his words and she decides to take him on a field trip to show him what it truly be a slave.

She takes him to the demon underground Brett not only discovers what it truely means to be a slave, but who Myserra really is.

Brett makes a choice in this part of the series, one that has some very complicated and powerful strings attached to it. Myserra wants Brett to be sure, really sure, that what he is asking for is what he really wants, and that he truly understands what it means. The journey from thought to understanding for Brett is one that he finds hard to take, harder to accept, and most of all, reveals something of Myserra that he didn’t know before. Her history.

Overall this part is all about choice. The choices that Brett has made and will make. The choices that Myserra made in the past and what that means to her in the present. Heather also plays a part in this matter of choice, whether she wants to or not.

It was, for me, nice to return to the world of the succubi, demons and all once more. The author began to construct a world in his prior series and in this episode he fleshes out quite a lot of the history, setting, and interactions that happen there. The appearance of a well known Succubus in this part of the story who reveals to Brett a secret about Myserra was nice to see as well. The world that Myserra calls home is seen in its many different views and beliefs about the keeping of those that are called slaves by them. What’s more interesting is the inherent logic within that structure the author sets into place. It is that logic, the possibilities that give Brett pause. While some of those possibilities are very dark, they are not the core of the story.

The main theme is Brett seeing what his relationship with Myserra gives him with respect to all of the others that are held by their particular Mistress or Master in that world. The shift that Brett goes through, from what he thinks along to what he actually is facing is, at times, difficult and it tears at his self worth at times. The idea of choice comes up in this many, many times and as it does over and over again, it is this, in the end, which drives Brett’s choice forward.

The story of Myserra herself turned a corner that I didn’t quite expect. It is her views on certain subjects that added a lot to her character for me. Yes, if she wanted, she could just “make” Brett a slave… But she doesn’t. The reason for that, most of all, is something that I personally appreciated because it shows one important thing about her. She values Brett. She values his choice. That is important and that she keeps that in mind with him, as has been seen so far in the series, is explained in a elegant fashion.

The work is driven by story, as it has been throughout. There is a bit more attention given to the aspects of otherworldly keeping of pets and slaves, some of which is quite harsh. But then not everyone is like Myserra or Brett for that matter and having things be different is important in this story. The writing is excellent and I have noticed a bit more emphasis on Brett’s internal thoughts and struggles which made the story better I felt.

The work wraps up this part of the series nicely, though the question of Brett’s future, his relationship with Myserra and what Heather has become and what will happen to her are left open to allow the story to continue.

A nice, tightly written conclusion, but with paths to continue. There are questions of course, but then all good writing should leave you to ponder things… What comes next for these three will be something I will be looking for…

This brings to a close the first book in the series, and as such I have a few thoughts of the series as a whole to share as well. I’ve enjoyed the building of the characters as the story has progressed. Neither Brett or Myserra were static though the series and that was good to see. I would have liked to have a bit more about Heather than we do to this point, perhaps that will be in the next book. While Brett’s relationship with Myserra is core to the story, I do wonder about where Heather will fit in the future, or what happens when, at some point, a key is turned with regards to her.

The world building that comes on top of the author’s previous series, which I also enjoyed immensely, is a large part of what draws me. It is erotica to an extent, but it is not, at all, the main point of the series. By doing so, there are many opportunities for storytelling and this author most certainly does so very well…