The Declaration of the Succubi by Legion

It’s called Devilicious… Not quite really…

A Review of Thrall of the Succubus by Elliot Silvestri 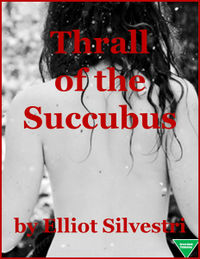 Thrall of the Succubus by Elliot Silvestri

One of the aspects about Succubi that I have always enjoyed is the differing kinds of mind control they possess and use from time to time. If that is done in the right way, it can add a lot of heat to a story for me and overall I like well done seduction with a touch of mind control.

However, I’m less thrilled with aspects of horror and violence that also seem to pop up many times when Succubi characters appear. To me, that seems very stereotypical and whatever heat I might have gotten from a good story tends to be muted to an extent when the blood and gore appears…

Being a bit of social outsider Liam always had trouble meeting women. He couldn’t believe his good luck upon meeting the very willing Sylvia. Their physically intimate relationship quickly takes strange turns not to the kinks he was hoping for but in the way she used his body. Become enthralled by an other-worldly being wasn’t so bad he told himself…

Liam meets Sylvia, she turns out to be a Succubus who uses her mind control powers to make him compliant, and then uses him to get something she wants. Overall that is the main plot of the story, but in truth that story has quite a few ups and downs in it.

Sylvia, the main Succubus of the story is, for the most part, really very stereotypical in nature and actions and the climax of the story, when it arrived, honestly didn’t surprise me very much. There is another Succubus, Lola, who appears for a short time as well and really isn’t much different than Sylvia is honestly. They both have the physical aspects of a Succubus and some of them are used in some rather unique ways really. There is a touch of mind control in the story, which for me was unique and had some nice heat in it. As well, the erotic moments between Sylvia and Liam have some very hot moments for me as well.

The problem is that there is, at least for me, a lot of horror, abuse, and similar topics and subjects that just do nothing for me. They all tend to drive Sylvia to be, overall, a stereotypical example of a Succubus as a being of horror… and she doesn’t need to be that I think. She is very dominant, which is fine, she controls Liam and his life, which is fine as well. But it is how the story goes from really a lot of heat and passion into the horror that bothers me the most. I think that overall it didn’t need to end up where it did and there is a huge hint that it didn’t need to. So why did it?

There is a minor issue with the work writing-wise. There are points where a letter is missing and the word is incomplete. For example, ‘h’ instead of ‘he’ at one point in the story that I stumbled over. It’s not a huge problem but they are there. Beyond that the actions of the characters, scenes and personalities are well done and have their own stories to tell. But, as I have said, the rougher aspects and the more horrific moments didn’t do much for me.

I wish that who and what I thought that Sylvia might be at the beginning of this work had actually happened by the end of it. There was just too much horror mixed into the erotica for my personal tastes and that made the work fade out for me as the climax approached.