A new low in Succubus costumes has been reached…

A Review of Prize Student by Salamando 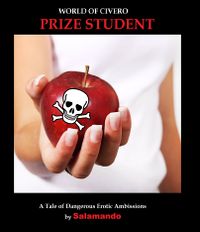 Many times the idea of a Succubus or Incubus is changed somewhat in order for the story to take on what is, really, a darker tone. The idea of taking the powers and abilities of them and making it the source of power for a more monstrous being does have a certain amount of sense to it and I can see how that could be attractive as a plot point or driver.

The threat that provides can be quite good to drive a story forwards or cause characters to do something that they wouldn’t normally do… or make them reveal their true selves in the story… Sometimes.

When James is told he has great magical potential within him, he thinks he’s hit the jackpot. A scholarship for Magical Studies is a rare and prosperous boon. But when the true nature of his powers is revealed, Professor Gemma takes him under her wing to groom him for a dangerous purpose of her own.

James goes to magic college, finds that he isn’t what he thought he might be and then is used, in various ways and quite poorly and ill conceivably by those around him. A mistake is make, a terror is unleashed and in the end everything might be lost…

I found myself torn by this work in two ways. First the overwhelming nastiness of so many of the female characters in this work just turned me off for many parts of the work. I don’t care for abuse or Dommes acting to injure someone and that happens far too often in this work for my liking. There are a number of scenes of female domination and control, some even with a touch of mind control and hypnosis as well that were well done and I liked them. But against that came a lot of hurt and harm to James that I didn’t like, didn’t accept as needed either.

What it came down to was that James was seen as a source of power and then the question became how the others would use him. They say that power corrupts and in this work that is so very clearly demonstrated by far.

The other side of this were the beings called Lust Walkers which, to explain them as simply as possible, could be seen as sort of a perverted version of a Succubus or Incubus but without the horns, tail, or for that matter, any kind of personality other than needing sex to survive. They do have the powers to control, cloud minds, and make others do what they wish, but they aren’t really Succubi or Incubi as I see them whether stereotypically or otherwise. They also really don’t appear for very long in the story and to be honest that was probably for the best as overall I didn’t really think much of them. They were something of a “monster of convenience” which fit into James’ abilities and powers very well.

The work isn’t really about the Lust Walkers, though they do drive the needs of Gemma in the story and the reasons they do are tragic in their own way, but even so I didn’t feel anything for her because of her actions. For that matter the other two main female leads were shadows of Gemma in their actions as well. Come to think of it, just about everyone that James encounters is tainted or tempted in some way because of what he is.

Eventually one character changes… slightly… But really it was just barely enough for me to care about them ever so slightly and that I think is the real problem I have. There are too many people to dislike for their cruelty, their abuse and their own self interest overcoming the smallest spark of good that they might be able to do… and really should have.

The work has some very hot scenes between James and Holly for one at the beginning of the work and the mind control or hypnosis scene is well done as well. There are a scattering of misspelled words here and there which was a bit bothersome, but generally happened in the moments of the story where I found it hard to keep involved with all of the pain and suffering going on.

That’s probably my own issue with this work. I would have liked to see more joy in James’ life than there is. With all else he went through… He needs that.

Overall as a story about female domination it is a bit too hurtful for my tastes and that bothered me throughout the work. Very little really seen of the Lust Walkers, and I would have liked to have known more about them than is told…