Just a bit of inspiration for a story to come…

A Review of The Demoniac Method by Mr. Potestas 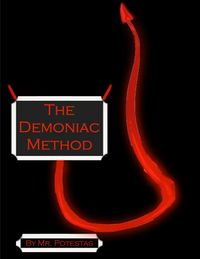 The Demoniac Method by Mr. Potestas

I find it interesting when science fiction and fantasy get mixed together. The method of how that is managed is key of  course, but while it can start the story, what follows still has to be driven by the characters, the situation, and, eventually, a purpose to the story itself.

In the near future, a miracle drug was created by accident. It’s transformative properties are capable of the most wild of physical changes, which are fully reversible. The expensive, heavily regulated drug is most popular with actors. Thus, it is nicknamed The Method.

As a result of taking the drug, she begins to transform, both mentally and physically into a Succubus, horns, tail, red skin and all. Along with that comes a touch of mind control over her husband and some rather interesting sexual needs as the story goes along. The transformation is really well done and I thought it was one of the better such things I have read for some time. While Lucy’s transformation is hinted at and isn’t really focused on, the mind control ability that she begins to possess is very evident as the story goes on.

The thing is, that as Lucy’s transformation progresses, she really becomes focused on one thing and one thing only to the exclusion of anything else. While that makes for some heat, I felt that it took away from what I think could have been a series of moments as she slowly slips towards being a Succubus. We really see her transformation from the view of her husband and not from within Lucy herself and that, to me, was a missed opportunity within the story that I think would have been interesting to see.

Nonetheless, this is a nicely hot flash as a whole with a little touch of a world and background that I thought would have been interesting to see fleshed out a bit more. When the story comes to a close the ending left a lot on the table I felt overall. The hint of where Lucy might go in her life and what might happen from this point forward are interesting possibilities which aren’t touched on save in passing.

Lucy isn’t an actual Succubus in that she takes the souls of others, but she does have a strong need for sex from others and that possesses her wholly, mind, body, and all else she is. But within that I have to think that she is more than just thinking about sex all of the time and I felt like that was a missing point in the story that could have been explored.

Overall, I think that this work could stand to be quite a lot longer and delve into the changes that Lucy goes through more, how she meets the people she does and how she controls them, and where things go from being an actress playing a Succubus to being a Succubus.

A cute little hot flash, but it is fleeting for me character-wise. I would have liked to see more of the transformation from Lucy’s point of view than we do honestly and perhaps a little less emphasis on the sex over the story itself…