The Point By TeraS

Darling, you aren’t what you think you are…

A Review of That Old Hell Magic by Justin R. Macumber

I know that usually on Tuesdays I post some of the RPing that I have done in the past. However, I’ve run into a bit of a problem that I need to address and that is I have a huge number of books about Succubi that I have not as yet reviewed and as such they are piling up faster than I am able to review them. As a result, I will be using, for the next while, Tuesdays on the Tale to post a book review from a book that is recently released in an effort to catch up as quickly as possible with all of the review that need to come… When I manage that, I will be returning to sharing my RPing here for those that are interested in that…

But for now… The Book Reviews begin: 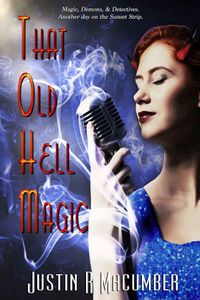 The question of what drives a Succubus is an interesting one. Generally writers see them as being evil beings that really don’t care about anything or anyone save themselves. The question that they fail to ask often is, why is the Succubus doing what she is? What is driving her to, for example, take a soul or seduce someone. What makes that something that has to happen.

With that comes the need to give the Succubus some character. Oh she can be sex on heels and she should be, but there needs to be that little bit more about her. Sometimes only a little tease appears, but in that comes a lot of personality…

Demons, magic, and the Sunset Strip. For Detective Darcy Winters, it’s just another day on the job as he walks into the hottest nightclub in Los Angeles to hunt down an unlicensed succubus. What he finds, however, is far more than he bargained for, and what should have been a routine bust quickly becomes a fight for his life, perhaps even his soul.

Darcy goes into a club and sees a jazz singer on stage and she’s mesmerizing powerful. She holds the attention of the room she performs in and the reason is… She’s a Succubus. Darcy is there to arrest her as it appears she has been taking souls. The problem is that what he finds isn’t quite what he expected.

The universe is really very interesting as it as as mixture of magic, steampunk, future tech and supernatural beings in it. It is a very rich universe and within that the characters, even the minor ones, are quite well described. The detail of Darcy’s world, his own appearance and the magics he is capable of are quite telling. I have to admit that from the beginning I had this sort of Film Noir mood in my mind that seemed to fit the action of the work really well.

Shira, the Succubus of this work, is just the right balance of seduction and power that I do enjoy reading when it comes to Succubi. Her description at the beginning is wonderful and when she is revealed in all of her Succubus self… It is really her. She’s sexual, erotic and unashamed of that, like any Succubi should be. But what’s more interesting is that she isn’t monstrous. When Darcy looks at her with “true sight” he sees her as she appeared on the stage, just with black horns, tail and wings. That in itself to me is important to me in that she is very much “what you see is what you get.” Really that’s the best kind of Succubus. One that knows herself.

By the end of the work, I really wanted to know more about her. She has attitude and personality that to me just meshed perfectly with Darcy and I would have loved to see that going forwards. I have the oddest thought that Darcy appears at his police station the next day and finds that Shira was working undercover and now is his partner… That would be interesting for the two of them i think.

Tightly written, really nothing took me out of the work by any means. But it is short and the action makes you race through the story to get to the climax and then beyond that there is but…. wondering. Lots of that really and as such I really would like to see these two meet again sometime…

Bit too short, I would have liked to know more about Shira because she interests me quite a lot really. Perhaps the author will revisit her at some point and see where things might lead to…