Oddly, it is a better movie than the original…

A Random Rant By TeraS

A Review of Sensational Possession by Arne Mellor 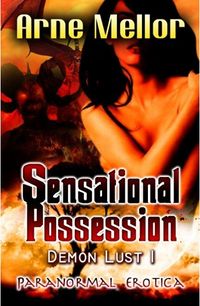 Succubi are not always the core characters of a story. Sometimes they are minor or passing ones that make an impression, in one way or the other, on the main character and then fade into the background.

While that happens because of story, many times I wonder what might have been the story if they had been more involved in a story than they are…

This is what happens when an ancient book holding otherworldly secrets to carnal sensations, falls into the hands of a young anthropology professor:

Kathleen wakes to find herself in some sort of a cell, bound and in the company of an impossibly beautiful woman, complete with batlike wings, tail and horns.

Then there’s succubi, demons and the Prince of Lust, all about to unleash Kathleen’s darkest passions and her ultimate sexual fantasy…

Kathleen comes into possession of an item with some very unique powers. Her curiosity and a bit of luck, find her being transported to another world where demons rule and she is at their mercy. And the very first being she meets is a Succubus…

The Succubus of the story, Geetha, is very much the image one might expect of a Succubus, horns, wings and all. She is very dominant and uses that dominance on Kathleen to full effect. It is a rather short scene as Geetha is a minor character in the work, she does appear once more, but there isn’t much told about her in the story overall.

I did read the next work, but there was no Succubi to be seen in it and as such I will not be reviewing that work here. I had hoped that the tonic of the Succubi might appear in this work, but it did not… But I had the feeling that it had much to do with what happens in that work.

Still, there is every chance of Geetha reappearing at some point and I will watch the series to see if that happens. She interests me, red hair and all… I wonder why?