A Review of The Succubus Prey by Robert Mathew 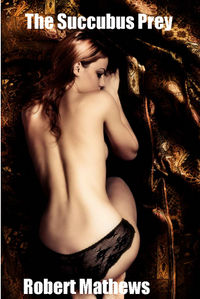 The Succubus Prey by Robert Mathew

Succubi are, but for a few instances, seen as being unfeeling, uncaring beings who care only for taking from others and nothing more.

But what happens when they suddenly do feel and know that the one they are feeding from and will be the end of… is the one?

What happens to them then? That is an interesting question to consider…

Val can take any form to give men pleasure. She has fed on the lives of men for eons without regret. Now it is her that has become the prey and her life will be forever changed.

Val has been a Succubus for a long, long time. So long in fact that she sees those around her simply as prey… a target… nothing more than a means to an end. But this time, in the place she finds herself, her prey is something different.

We never learn their name, who they are, nothing really about them save their innocence and more importantly, their overall good soul. But it is their soul, their being that does something to Val… she discovers that he is the one for her and her alone… and she will be his undoing.

The work is a hot flash in one way, through the heat in the story, but it is also so very much a tragedy in what occurs throughout the story. It is I think important that the story matters and means something. In this work, that is very true.

I would have liked to know more about Val and the one she finds in this story. There are broad hints about the latter and a few specific points about the former, but I was left a little bit wanting by the end of the story. But in spite of that, the change in Val that happens, the moment when the other… knows. Really knows who she is and what happens from that point on is heartbreaking.

I think I would like to see more about Val, and perhaps, somehow, something better can come from all that she now knows…