A Review of Succubus Tear by Andreas Wiesemann 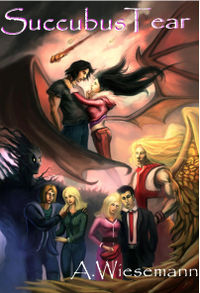 For the first book review of 2014, I’m going to share my thoughts about what to me will really be the mark to which all other works about Succubi have to meet.

I have a very specific belief and view about Succubi and when I discover a work that takes that belief and makes it so much more, that truly is one of the most satisfying moments for me as a reader. That in itself is special, but then to wrap that understanding into a journey that leads towards something more… That is a work that I will always come back to.

It is said that the one thing that all beings need to understand is themselves. Why they are, who they are. It is the discovery of that which then allows what which is thought to be impossible… Possible.

Together, they will be the herald of a destiny transcending everything either of them knew. A story that goes beyond. From the depths and darkness of hate, and pride. To the heights of Faith and true love..

This is a story about belief. The belief in oneself. The belief in one’s faith. But more it is the story of the belief that one soul has for another. One can simply exist, or one can actually live and as a whole, that is the story of Cain here. At the beginning, he is damaged, lost, and comes to a choice which is difficult to read. However, the moment that he is entwined with Al’bah, finds that she is as lost as he is, is drawn into not just existing but being cared about by another and then trying to understand his own relationships, Al’bah, the universe, and others that have been with him so long and just arriving, is a long difficult road to travel for him.

There is a sadness, loss, perhaps a missing piece within Cain that haunts him throughout this work, but that’s important. It does not make sense for a character to wake up one morning and have their life figured out, understood, and then carry on. Cain does not have it easy in this work for many reasons, not the least of which is that he is so deeply troubled. He battles for so many things as the story progresses, but the most wonderful thing is how his relationship with Al’bah changes over the course of the story.

The one thing I want to see in a story about Succubi is that they have a personality. Within that personality the need to explore, to learn, to believe that they can be more than they are expected to be is paramount. It is not, by any means, enough to say they are “evil”. I do not subscribe to that point of view. They are more than what labels are placed upon them by those that either misunderstand them or cannot accept them to be more.

Al’bah is more. She is lost in our world at the side of Cain. She has her moments of anger, loss, compassion and need as Cain does. She tries to explain what Cain means to her, truly so, and it not heard or perhaps the ability within Cain to believe her is lost for much of the story. It is that slow fawning of understanding in him that changes Al’bah as well. We really only see her in her Succubus form very sparingly. The important point to that is that she sees that display of her true self as being something intimate and special which only Cain is the one to see. She is of the Succubi, but more she is of Cain. That distinction is important over the course of the story and drives her personality, her moments of both fear and joy. She is really one of the most wonderfully powerful Succubus characters that I have read in some time.

Part of that is both her innocence of our world, but also it is her own belief, her own faith that is not something that she is suddenly given, but it is a part of her from the beginning. This one passage, spoken by Al’bah in the work, for me, is telling about her and tells of my own beliefs about the Succubi:

There are so very few that write stories about the Succubi that can understand that for them to exist, for them to be, is special. What if, as an aside, Succubi had been seen as Angels from the beginning? To bring this simple truth to others? What a different tale they would be telling now. This work tells that story fully and with emotions that, for me, tugged at my heart strings. Al’bah expresses the most wonderful of thoughts about the Succubi and I will always cherish and remember that about her.

The work is more of an adventure, a coming of faith, a finding the path one needs to follow. There are a few intimate moments with Al’bah and Cain, and how they are written, described, and are experienced by them is exactly right for the two of them. It isn’t about erotica, it is about love and that is a very important distinction here. Love, real love, especially for Al’bah and Cain is stunningly important. As it should be. The acceptance of love from another and the returning of it, completely and totally is something that sex cannot hold a candle to.

I found it really special and unique that there are some sketches in the work before several chapters that help to place the moments to come into context and a moment. They are sketches, but the hand that made them placed so much emotion and will into them by far. The colour art works as well give moments from the story that add texture to the images that come when reading the passages they are connected to.

The characters are full and vibrant, the writing is excellent with no points where it felt awkward or uneven. It is a long read, but the writing is such that time passes by unnoticed for how wrapped up one becomes in the work. From the beginning to end you care about what happens next and that is something that the best writers can do. When the work comes to a close I was left wanting more and, thankfully, the author has a tease of the first few chapters of the next work in the series which I personally cannot wait to arrive.

Just wonderfully written, an engrossing work that I could not put down. Not all is joy, not all is lost, but there is the in-between and in that comes everything that can be. Just everything that I want with the story and characters that make everything be. Succubi are more and in that this work and the work to come give that and more…