A Review of The Celibate Succubus by Barton Paul Levenson 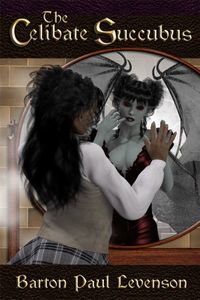 One of the things that I think about, quite a lot actually, is the question of what do the “higher powers” think of Succubi. The question of what they see Succubi as, if they have a place in the universe where they are loved for themselves and not what others believe they are.

Mixed with that is the question of why can’t a Succubus be good? Why is it that they must, apparently, be “evil?” It is a choice more than anything else that make them who and what they are. Sometimes that choice is doing the right thing because it is the right thing. Sometimes it is looking past what the universe tells you and instead taking the chance to believe in one very important truth. We make mistakes. We learn from them. Everyone does.

The work I am reviewing today, The Celibate Succubus, I think is really one of the top ten stories about Succubi that I have encountered this year. I’ve said that story and the characters to drive it forwards matter the most. That truth is so very clearly seen in this work by far…

“Team Packer” is a covert Catholic strike team against supernatural evil with a secret weapon in its arsenal: 16-year-old Delilah Vincentio—the world’s only Christian succubus. Trained by demons to despise humanity and lead them into sin, her unprecedented capacity for mercy caused her to renounce her place in Hell—and gain an angelic referral to Team Packer.

Delilah is assigned to infiltrate the Order of the Lightbringer, a Satanic cult that plans to make Pittsburgh a test site for the Apocalypse. After Delilah’s identity is almost discovered, Team Packer sends her to high school to hide out until things cool down.

But while Delilah may be reformed from her beguiling ways, she’s still very much a demon—and she hasn’t learned how to play well with others. In fact, trying to fit in and keep a low profile at high school may prove to be a tougher battle than bringing down the Order of the Lightbringer.

Delilah’s journey through this work is in many ways a story of discovery, acceptance, loss, love and sacrifice. We see her live the moments at first without understanding what is happening around her, not seeing her faults and having some of the poorer parts of her come to the fore. However, there are two things that from the beginning set her apart. One is that she has a soul. While some can see only her physical form: wings, horns and tail, there is within her a compassion that so many around her seem to have lost. The other is that she found her own truth and she holds that through her trials and tribulations.

Delilah, as I have said, has the aspects of one of the Succubi that I adore, one of them being quite fond of her tail, which I loved, but it is her inherent personality and will that for me at least makes her quite close to what my own vision for the Succubi is. She knows right from wrong and walks that line every day. She is tested by the world she calls home when she makes the choice to protect an innocent and through that begins a path that no one, least her, would have expected.

She finds friendship from some, hate from others. She finds one soul that loves her for being who she is. She finds another that cannot accept her for what she represents to them. Doors open to friendships that are tested, strongly, but they hold and in doing so Delilah becomes more than she was. She… learns what it means to be human and that knowledge is the most precious thing she holds as the story goes on.

She sees the good, the ones that give her a chance to be more, to see more of herself and to become a part of a greater whole that she did not expect to be. There are rough patches of course, but they allow her to learn and find her way. As we all do.

This is not a work of erotica, to be clear. It is focused on Delilah discovering that anyone can be found to be worthy, loved, and cherished no matter who they are if they can see that within themselves. But also she finds that those that serve in the darkness can be more devils than those she had known all of her life. She learns lessons that with her own soul take her towards something she never imagined would be.

The supporting characters, especially those that are with Delilah are well told with their own histories, beliefs and arcs within the work. While Delilah is eighteen, at least physically, she is quite a lot older than that intellectually. The thing is when she meets and make friends that are her apparent age… It really becomes a passing of age moment where she learns more about herself and those she calls her friends discover that anything is possible. And the truth they share finally is one that matters.

There were a few points where the story took a darker turn, one of which to be honest I turned past because it touched on something I find hard to read about. There does have to be darkness in the light and as Delilah is part of those that turn it away that has to be… I just felt that in one instance that it was a little bit too much when compared with the rest of the work and I wonder if it would not have served the story better for it being off the page and only referred to instead of shown.

The climax of the story was in one part a resolution of Delilah and another character’s strife. In another it felt… sad. I had a hope that there would be something that Delilah promised another character by the end of the work, but it did not come. She is given something that she, and many others, did not believe she could have or be. It made me smile when one character told Delilah that she looked right with her wings and tail. It’s nice to know that they do see that.

The writing is wonderful, being the right tone for the moment when it arrives, and setting an image in the words that is very vivid and clear. Strong characters, settings, and plots that weave neatly through the work as a whole.

Really one of the best stories about Succubi that I have seen this year. There is an open door at the end which I would love to see the author take someday… Perhaps they will and if so I will be there to see that tale as well. I hope that day will come…