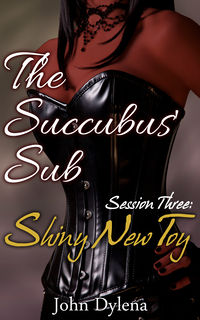 This review will be of the third work in the series, which to this point is where the series has paused for a time… But the series is far from over and that, as they say, is a good thing.

Trust, real trust, is something that must be earned in a D/s relationship. A Domme trusts that her submissive will do certain things without fail. A submissive trusts that their Domme will remember their promise to them, what it represents and, most of all, will understand them, what they desire and what they would like to experience at their hands.

It is that experience that either cements the relationship for all time or tears it apart. The question is, where is that line and how close can one come to it without going over it?

After an odd day at work, Brett returns back to his home to find Myserra waiting for him. The succubus wastes no time in removing his clothes and taking him back to her bedroom.

It isn’t long before Brett is neck deep in shiny white latex and helplessly bound, hooded, gagged, and plugged and the session begins.

One of the things that I have enjoyed in the series is the world building that continues here. While we know of the Succubi, there is an interesting little comment that Myserra makes that Succubi are one of the few “demons” that can walk among humanity and not be seen. That’s interesting to me as it shows that there is something special about them, which there is anyway, but it’s something to define them as not being monstrous and that is important to me. Through this there is a new aspect to Myserra and Brett’s relationship that opens doors to some interesting possibilities. Where that leads will be something to watch.

More so, there is a new character in the work that seems to know that something has changed about Brett and that makes him more attractive to them. The question is of course who and what they are and what that might mean to Myserra and Brett over time. I have a thought about that, whether I am right or not I’ll keep to myself, but it does add a layer of what seems to be conflict for the future. Perhaps it will be a catalyst for something more than the series has hinted at to this point.

The theme of trust comes up quite a lot in this work. Brett finds himself at the mercy of Myserra and she changes him to an extent physically. Within that change also comes some of Brett’s own desires, wants and needs. Brett has to trust that she knows his limits and how far she can take him. Myserra has to trust that Brett will manage to keep his being hers a secret, but also to defend that place he has. There is temptation that appears to Brett, for a moment, but it leaves a lot of questions, one of them quite telling I think about that new person in the story that is attracted to Brett. I wonder just how much they know…

There is a touch of gender transformation in this story and Brett’s reaction to it is rather cute in that he would accept more of it, but Myserra again tells him that good things come over time and not all at once. When that moment comes I wonder if Brett will want his desires in ways he does not quite realize as yet. There is a bit of bondage, which from Brett’s perspective is something he finds he enjoys quite a lot. That makes Myserra’s own passions burn a little hotter as well which brings up a moment that I found quite telling. How Brett’s desires effect Myserra. How she both controls him and in return is controlled by his desires.

Succubi are, after all, reflections of the desires of the one they are with. In that understanding can come many different stories. The one that Brett walks is one that I wonder where it will lead for him eventually.

When Myserra draws Brett into her world and she has her way with him, there is lovely heat in the telling of that story. The situation that Brett finds himself in takes away his vision and so the sense that is told is one of touch. That is one of the hardest things to write about as expressing the caress of a hand, the feelings that course through one’s body is much more difficult to write about when there cannot be anything visual in that description to be told. The author did very well with those moments and it was quite interesting as to how things were described.

The work ends on a point which tells of both Brett and Myserra’s feelings on what they each experienced. Beyond that there are a few questions about just how Brett will manage to make it through each night and day if he has to deal with Myserra being there all of the time. That is what I enjoy most about this series. There are questions, thoughts, and ideas that appear with each part and it builds towards a goal. It is not a series of hot flashes but rather a story to be told and it is being told quite well.

The only real nitpick that I have is that there are a few spots in the work where another editing pass might have picked up a word or two that was wrong. For example, “formed” instead of “form” at one point referring to Myserra shifting from her human to Succubus form. It is a little thing but for me I stumbled over them and it drew me out of the story for a moment.

There are, again, a few rough patches where there are some things that one more edit would have caught and taken care of that made me stumble a bit while I read. Other than that, a really enjoyable read with universe building that I enjoy seeing. Lots of questions to ponder, again which I enjoy, and they should be fun to watch unfold.