A Review of Session Two: Dressing for the Occasion by John Dylena 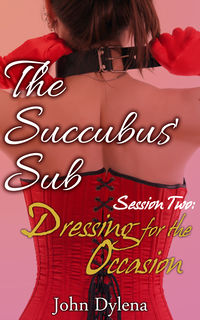 Session Two: Dressing for the Occasion by John Dylena

One of the things that can be difficult, both for a Domme and her submissive, is that first time when some discipline must be meted out. There is a line that cannot be crossed for doing so means braking a trust, a confidence, a promise. One can come close it to and must in order for both to learn and grow in their own ways… but it is a tightrope to be walked and that, more than anything else, marks something only a few will ever understand…

After a night of the best (and only) sex of his life, Brett agrees to become the plaything of the succubus Myserra.

She greets him in the morning and the two converse and work out the details. He tells her his kinks and fetishes, and after she marks and collars him, he forgets to address her properly.

Myserra takes him to her chambers where she carries out his punishment: spankings. With his cheeks sore and his lesson learned, she surprises him with the outfit he must now wear: a corset, stockings, and high heels.

The story of Brett and Myserra continues as Brett finds himself marked and collared by his Mistress… and discovers that sometimes with the ecstasy there comes a bit of punishment. What I found interesting about that was how those scenes were told by the author. I have mentioned that I do not approve of, or enjoy, the idea of harming a submissive. Within this work a clear truth is told that I honestly believe that the mainstream do not understand about D/s relationships. Most see them as being torturous, painful, and worst of all at least from my perspective, they see submissives as worthless.

This is not, at all, what a D/s relationship is. And I was really more than pleased to see that this author understood that. Yes there are moments when a Domme needs to discipline her submissive. Yes there are times when a Domme will push them to the edge of their comfort zone and beyond. It is the role, as I see it, for the Domme to be part of the exploration of self not for just themselves, but for their submissive as well.

In this work, Myserra is a bit of a strict Domme, which really suits her personality quite well. While she does have to correct Brett for some mistakes, there is purpose to her doing so and it is not punishment for the sake of it.

Possibly the most interesting exchange is when Brett tells of his sexuality, what he enjoys, what he will accept and not. The ground rules are very clear from Brett’s concerns, needs and desires but what is more important is that Myserra respects them. This is critical. So much so that many may skim over this part of the work but it sets out the future for their relationship and shouldn’t be.

Through the erotic moments of the work there is lovely heat but as well there is a touch if introspection from Brett which makes the scene more than it otherwise is. He is transformed, slightly, but as Myserra notes, having everything at once isn’t a reward. One needs to earn it and I think Brett will. Brett’s comfort zone becomes a lot wider and more accepting through her actions, as really it has to for what Brett experiences. The thing is, unlike a lot of hot flashes, this work has personality, history, and desire within it and that is something that I personally need to see.

There is a rather cute twist at the end of the story which I look forward to seeing where it goes in Part Three. I won’t spoil it here, but really is it quite perfect and it makes me ponder quite a few things about Myserra and someone where Brett works…

Written well, save for one minor editing issue which you will likely not notice. Tight pose and I do have to admit that the various movie quotes at the beginning of the work that went through Brett’s mind when he realized that the night before with Myserra was real made me smile. Overall a strong part to the series and it opens some interesting paths forward…

A shade on the short side I think, mainly in that the connection made in the first work I think was not quite expanded upon enough for me. I felt as if there was a piece missing in-between Brett’s needs and Myserra’s giving Brett his first taste of being her submissive. Nonetheless, there are many truths told here and more to come which make this series fascinating to me.

Part three will be… interesting… I’m quite sure.