Tail be Told by TeraS

A Review of Session One: The Offer by John Dylena 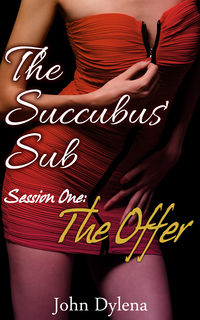 Session One: The Offer by John Dylena

Recently I discovered an author named John Dylena who wrote a series of works called the Raethiana Trilogy. I have reviewed all of the works in that series here, here, and here on the Tale earlier this year.

At the time, I felt that there was more to be told in this universe, that the world was rich with stories and that I had hoped the author would continue writing in this universe. While not returning to Raethiana and John, the main characters of the previous series, this new series, called The Succubus’ Sub, brings another Succubus and another soul together. But it is quite a more involved and interesting series as it brings up a question about the relationships that Dommes have with their submissives. One that I feel so many do not understand and need to…

What would you do if you came home to find a succubus waiting for you in your home?

On a stormy day Brett comes back to his small place soaked to the bone. Just as he was about to enjoy a nice hot cup of cocoa, a mysterious woman introduces herself as Myserra, a succubus with an offer for Brett.

She promises him an end to his solitude on one condition: he becomes her sub.

The beginning of a series of adventures following the succubus and her human pet, “The Succubus’ Sub” is set in the same world as “The Raethiana Trilogy” only the two couples never cross paths…or do they?

I think one of the most misunderstood things about a dominant/submissive relationship is the relationship itself. There are certain things within that relationship that need to be there or it isn’t one. Some feel that submissives are slaves. That they are to be treated as such, that image is all that they are. But the thing is… That’s not the truth and not how things truly are.

Brett has that opinion of what a submissive is when Myserra asks him to be her submissive. It is the explanation that she gives of what she means, what the promises are that she must give as a Domme, the promise that she must give to Brett that is unique. To be honest, they are also my own personal thoughts and experiences with D/s relationships. I have never believed in the need to be cruel or aloof towards those that give you the honour of being their Domme. Myserra, both as a Succubus, but also as an example of the way that Dommes should be, just fascinates me.

While this work is only the opening of their story, there is a certain connection between them both that I found refreshingly unique and wonderfully meshed with the author’s previous series. The way Myserra appears, presents herself were just right and when she becomes her true self, that is a lovely image I had in my thoughts.

I couldn’t help but smile when Myserra had to deal with Brett’s uncertainty and concern over his inexperience and the thought that he was going to be with a Succubus, to him the epitome of sexuality and erotism. It was also interesting to see how Brett thought his way through Myserra’s appearance and his attempt to rationalize the situation he found himself in.

Overall a well written lead up for a new series from this author and I am really looking forwards to where the story of Brett and Myserra goes from here. The universe is a wide one and once the first awkward moments are past I think there are some tales to be told and moments to be experienced.

As always I would have liked a bit more story. Somehow I feel like there is another part of the story that was hinted at, but not touched on and I hope that happens. There are a few little nitpick word errors, but they were very few and didn’t take me out of the core of the story which I was quite pleased with.

Much promise here, much to be learned and shared as well within the story… It will be quite the ride for them both I think…