A Short Thought by TeraS

A Review of Encounter: First Lesson by Cynthia Sax 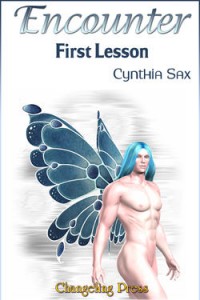 I think that the hardest thing to write is a short hot flash that is… well… hot. It’s not enough to write a story that has sex in it for that you expect in a hot flash. There should be characters that hook you from the first moment and you want to see where the story goes from there.

When this involves a Succubus, then I like to see one that isn’t simply a sex toy, which seems to be the way most writers tend to see them in very short stories. When the Succubus is intelligent, witty, and has a personality that just comes off the page and stays with you… that is special. When the lucky demon she is playing with is as interesting… That makes for something very special to me…

A succubus offers her class a demonstration on sexually pleasing a demon.

Saffron is a Succubus and, interestingly to me, she’s a teacher. She teaches what I assume are other Succubi how to control the demons that exist in their world. The thing is that she needs a demon for a… practical… demonstration. And Nac comes to her call in more than one way.

This is a hot flash story, so the heat appears very quickly and builds to a peak in a very short period of time. The thing is that it isn’t like most hot flashes in that there is story, a lot of story and background packed into four short pages which simply amazed me. There is so much hidden within the first few paragraphs when Nac sees Saffron and she controls him so neatly and completely. The reactions seen are mainly from Nac’s point of view which makes Saffron’s control of him seem more complete and overwhelming. He thinks of Saffron as his, but I am very sure from how well she plays him that he is Saffron’s by far.

I thought it was delicious how both are described just enough that you have a vague idea of what they look like, but not so much that it overwhelms any kind of fantasy that forms within your mind. Less is more in that respect, and the more comes in what happens in the classroom.

I loved how Saffron described how to pleasure Nac, bit by bit, piece by piece until there was nothing else for Nac to do but to submit to her control utterly. Seduction is the mark of the best of the Succubi and Saffron is certainly one of the very best that I have read in some time.

The story is however so short that it left me wanting for so much more. I wanted to see what happened next, what class Saffron actually taught, what kind of school it was. Questions abound about who the students were, why Nac fought to be the one to be used by Saffron. So many open stories in this short tale and that was the one thing that I really needed to know more about.

As a hot flash about Succubi, this is really one of the best of the year as far as I am concerned… I just wish it wasn’t a hot flash and was a novel or better…

I really and truly want more about Saffron and Nac. I can see so much in them that I would want to explore. I really wish that would happen someday because there was so much hinted at that was never explained… But I can imagine and this story makes those fantasies delicious…