Succubi Image of the Week 304

A Review of One Less Warlock by Judith Post 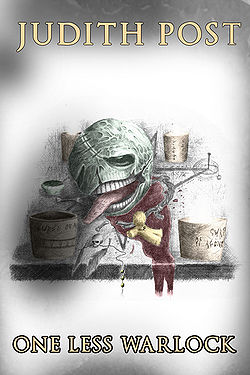 Not every work that I review has Succubi or Incubi as the core of the story. However, they do appear nonetheless, and, sometimes, that appearance really brings a different view of them that is enjoyable to read. Some authors manage that throughout a story, and the book I am reviewing today does that extremely well…

Emile, River City’s most powerful warlock, has been stabbed in the back and murdered in his own home. When the police can’t get inside the warlock’s house–which is protected by magic–Detective Prosper turns to Babet Spellbound for help. Babet, a witch, slowly begins to release Emile’s wards and in doing so, is plunged into a locked room mystery. But as Babet helps detectives, the case becomes more puzzling: If no enemy could get past the warlock’s protections, then how was he killed? And by whom? Finding the answers leads Babet to question Lillith–a succubus madam–and leads her to a settlement of women and children on the river banks that she never knew existed…a tight group of females who don’t welcome outsiders into their midst.

This is a murder mystery, but what makes it more than that are the characters in the story. Not so much Emile, he is not well explored really over the course of the story, but that’s not really the point of it. The point of the story is to discover more about Babet. Who she is, what she is, and her past are really very interesting to read about. The revelations that come from her investigations are more than I expected and in the end she becomes much more real by the end.

Besides Babet, there is Lilith, and she is someone that I would have liked to know more about. We are told that she is the madam of a supernatural brothel, but my question is, how did she come to be there? It’s a question that is never answered, which in the setting of the story isn’t important, but it makes me ponder. The description of Lilith is wonderful and she acts, looks, and presents herself in a way that is very succubus-like. But it is also not overly sensual as much as it is the power she holds and the status she has in this world.

There is a wonderful mix of Succubi, Weres, Vampires, and the appearance of magic in this story is really well done. While all of this is important to the plot and the resolution of the story, the author gives just enough detail to make everything work together without it overwhelming the story.

But in the end, the one character who leaves some much to be explained is Babet. There is a revelation about her father that I didn’t expect which has me wondering about her parents. Her mother is spoken of, but is not present in the story so those questions aren’t answered here. The combination of Babet being both a Succubus but also a witch is something that isn’t really explored in the story either. There are small hints about it, but they are fleeting and I would have liked to know more. The same is true of her relationship with Prosper. There is an undercurrent of sexual tension between them, but we never see that appear by the end of the story, though it is hinted at many times.

The work felt like it was the opening chapter of a longer novel and I can only hope that the author has something like that in mind for the future for this universe. I would certainly read that story for the characters and the setting created here.

While the author writes well, there were two small points in the story where I felt as if a wrong word was used to describe an action by a character and that brought me out of the story for a time as I tried to figure of what was going on exactly. Otherwise the rest of the work is wonderfully done, but as much as I loved it, I wanted so much more when the story was done.

So much tease in this work about Lilith, Babet and their individual pasts and the world they live in. I’d like to see more by this author about them. Perhaps that will happen someday…