A Review of The Demon in my Heart by John Dylena 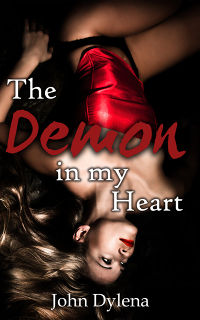 The Demon in my Heart by John Dylena

I am continuing my review of the Raethiana Trilogy by John Dylena today on the Tale. I reviewed the first work in this series The Demon at my Door here on the Tale and there will be one further review of the concluding book in the series to come with my next book review.

I have said that story matters. More so beyond the story is the question of the characters themselves. The best stories are those that create worlds within which are characters that you truly care about. You suffer the slings and arrows, their ups and downs… But most of all, you gasp when truths never expected are revealed.

This work continues to do all of that and more…

This work continues the story of:

The second book details the ever changing life of John as his love for the succubus Raethiana gets stronger. Following the truth behind his immunity to her magic, John finds out there is more to him than meets the eye following not only a night of passionate sex with this demon lover, but also after a fateful trip to the demon underground.

John travels further down the path of self discovery as an ancient enemy lingers in the shadows. Everything changes and the stakes rise as the story builds to its inevitable explosive and romantic end in the third and final book.

Where do you start when a story brings you to tears? It’s hard to describe the emotions that come as this story continues to develop. The discoveries that John learns about himself, the reactions from Raethiana, the stories of Succubi Queens past and present… There is so much depth to this work that telling of it in detail would be a terrible thing to do because every single scene matters. Which is the mark of good storytelling, and this work certainly is.

John’s discoveries about himself, his past, the true past, and what it means to him are filled with emotion, loss, devotion and, finally, a measure of acceptance which I found to fit who he is in the series quite well. There are moments in this work were things happened to John that were puzzling, but then were explained in a logical, reasonably way that felt like they just were right for him. Two scenes in particular were truly important, one being when he met his mother, the moments there were so much more than I could have expected them to be. The other was when Raethiana transformed John into a Succubus. It was… right. That’s the only way I can really explain it as the picture I had in my thoughts when that happened were that it just fit right with all that had happened in the story to that point.

Raethiana discovers much about herself and discovers that some things she thought she knew she really didn’t. The revelations that reflect on Raethiana’s world and John’s for that matter take a toll on her. They aren’t simply brushed aside or ignored. They become part ot her, of her decisions, of her desires. In that she is transformed in a way that she never expected to be. Love, after all, can make one do… anything… and in that Raethiana will never be a stereotypical Succubus which made me particularly happy.

What I found the most interesting was the tales of the world in which Succubi live in. Of their history, what they did in the past, who led them, what they stood for, and who in the end stood against them. How that stance, that change gained their race something more than they had before. It is so much more than I expected to see in this work by far. I have said that I like erotica to be more than the friction between two characters. I want it to tell a story, a good story, and if the erotica isn’t the point of it, I am perfectly fine with that. This work, the middle of the series, tells a story that in the beginning I never expected and that was a joy for me to find here.

There is heat in the work, a lovely passionate scene between Raethiana and John that was delicious in its intensity and power that does have a gender change in it for John, but the way that is told, how it is approached, blends into the rest of the story quite well and in doing so just connects them both to where the story goes from there.

There are, as well, two Succubi Queens in this work, both of which are, for me at least, how I see that such beings should be and act. It was lovely to know of them, to find out their secrets and discover who they really are. It is said that you are given a title but you need not be that. You need to be yourself. Both of these Queens show that truth clearly and for that I was thrilled…

It really is a wonderful story that just connected with me in many ways and I really enjoyed. There is a small issue however in that the author had, like the first work, some tense errors and one other minor issue during the story with a single sentence. Otherwise it has passion, it has depth and it tells a real, gripping story.

This is not simply erotica and it should not been seen as such. There is so much more to this work and the series as a whole. Three books in this series I feel is not nearly enough for all of the world building that the author has done here, but there is only one more book to come… This coming Sunday on the Tale I’ll be reviewing Book Three in this series called The Demon in my Soul. I have high hopes that I believe will be met and surpassed by far…