A Review of The Demon at my Door by John Dylena 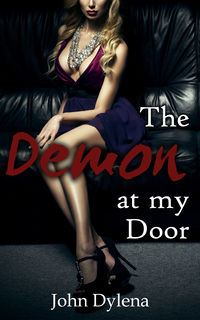 The Demon at my Door by John Dylena

Starting today on the Tale and for the next two book reviews, I will be reviewing a short series that I think is really one of the better series that I have found this year. I believe that no character should remain static throughout a story. They need to learn something or do something. They make choices that are either good or bad, but they make that choice. In the end a story that is simply sex and nothing more is not really a story.

There are some that have the characters, the moments, the experiences that in the end make all of the characters so much more than they were at the beginning of the story. Really that makes for what can be just about the perfect story… Assuming that all of the i’s are dotted that is…

Shy and introverted, John’s dream was coming true when he returned to his apartment with a beautiful blonde woman at his side. Things quickly heated up and his dream became a nightmare when the blonde revealed herself as a succubus and he was her next victim.

But much to both their surprise, John survived the ritual and the demon got nothing. John’s life turns upside down when he finally wakes back up only to find the succubus not only still in his apartment, but also his new roommate.

John goes out, meets a woman and then the following morning finds she’s part of his life… and she’s a Succubus by the way. If that was all the story was, it really would be a good hook and it would make for an interesting story on its own. But this work is something more than that. It’s about looking for love and finding it in places you would never have expected. That’s not just from John’s perspective but from that of Raethiana, the Succubus that entwines her life with John’s.

At the beginning I really wasn’t sure I would like Raethiana, she was… well… almost but not quite the stereotypical Succubus that really does very little for me. However, as the story goes on, you can see how she changes over time, how her view of John changes and that’s interesting to watch unfold. She does have horns and a tail, but as well, no hooves and that really made me like her much more. What really turned the corner for me was the moment when she thought she would lose John because of another… That moment, that understanding in her character made all of the difference.

The things she shows him make John better as well. having much more depth in his character well before the end of the story comes. There is a truth that he knows well before Raethiana does and it really plays out well as they have many adventures together.

It was heartbreaking at times the things that John thought, how he felt, and what in the end he came to see was the right thing to do. There is a point, a very important one, where John is forced to make a choice and in the aftermath of that choice the devastation within himself is an awful thing to see. But through that, through what happens, Raethiana at least gets a clue and from there the story moves in a new direction that I didn’t expect to see.

The climax of the story, or rather the surprise at the end, I didn’t quite see and when it was revealed in a way that made a great deal of sense I had one thought… Where is the rest of the story? When all is explained, or at least hinted at, the work closes and we are left wanting for the next part of the story which I hope the author continues at some time. I have a feeling that I know what John’s secret is and if I am correct… it really reflects on his life and Raethiana in many interesting ways.

There are moments in the story when Raethiana works some of her magic on John and while I did enjoy those moments in the story, there is one thing she does to him that has lasting effects and that added a lot to the story. It has always bothered me that someone can be changed or altered and then returned to normal in a story and then go off as if nothing had happened. That isn’t how things are and the way this author dealt with this was well done and led into a more critical part of the story seamlessly.

With all of this good there is but a single thing that bothered me about this work. The author really should have taken another edit of their tale. There are a number of tense errors which make sections of the story read very wrongly and took me out of the story when I really didn’t want to be. Please use one tense throughout your work and that really would be the only complaint I have…

This work needs one more editing pass to remove the many tense errors in it. It is really the only fault there is with a deeply involving story set in a detailed universe… And I really wanted to see where things go from where they end… And this coming Friday on the Tale I’ll be reviewing Book Two in this series called The Demon in my Heart.