Succubi Image of the Week 303

A Review of Monogamy is Dead by Jennifer Mancini 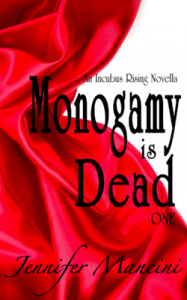 Monogamy is Dead by Jennifer Mancini

A story about the flaws of being a human being and not having your life be perfect is interesting as well. But then what happens when you find perfection… and it isn’t enough?

The work’s summary tells about:

Socialite Bianca Lightenger has everything a woman could ever hope for but still happiness eludes her. The only thing that tempers the dull ache of ambivalence is casual sex with a long line of willing victims. Until the day she meets Gabriel, a man who isn’t at all what he seems. Will Bianca be able to accept love on his terms or has she already missed out on the fairytale life of her dreams?

Bianca is, for lack of a better description, lost. She is never satisfied and can never quite be really happy. She drowns herself in sexual encounters and this leads to an encounter on the street that finally pushes her relationship with her husband over the edge and into oblivion. After that moment, she finds herself entangled in the arms, and other parts, of Gabriel. He needs sex every day to survive, but tells Bianca that he loves her. The problem is, can she believe this knowing her own life?

Bianca is the core of this story and everything is seen through her eyes. That can be, truly, so very sad in so many moments because she just cannot really be happy. That one core part of herself, that she cannot come to terms with just destroys every relationship at some point. And when she sees the aftermath of what her husband does, or has to try to come to terms with Gabriel having sex with others… She simply cannot and shuts down.

Gabriel is an incubus, in spite of what he rationalizes in the story. While he does, and actually another minor character just confirms this for me, remind me of Fae, and those that watch Lost Girl will get where I am coming from, the tale of who and what he is doesn’t come into the fore. It’s more about the sex with him, and for that matter with Bianca, than anything else.

There is a revelation that Gabriel has and in doing so he gives a gift to Bianca that changes everything. In that moment, the story becomes much better. The path it takes from there, what happens and the end result of that gift are stunningly powerful considering all that has transpired in the work to that point.

There are things left unsaid, questions about Gabriel and those around him that are not delved into and that is something I would like to know more about. Perhaps, possibly, there is another work to come in this series and more of the back story will appear.

It would be nice if it did.