A Review of A Hope in Hell by Jeremy Sterling 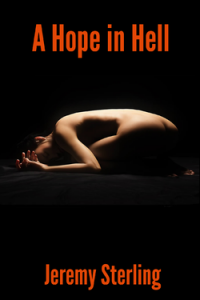 A Hope in Hell by Jeremy Sterling

One of the stories that I like is when the Succubus is the catalyst to a story. She is there, teasing the story forwards, moving the players towards the climax. Whether that is a climax or a climax, is another question.

The other thing that I like to see is when the Succubus is Lilith, she is something special. I want to see her being the power she is and not a characture of herself. That can make the story something more than it can be otherwise. Add in a bit of redemption and you have something special…

A seductive demon has John locked in her sexual thrall. His only chance is Tasha, a woman whose brilliance and knowledge of demons, both internal and external, may be just want he needs. Except Tasha resents John for thwarting her own attempt at suicide, and sees the demon as offering her the freedom she craves. John hasn’t a hope in hell.

One thing I need to note is that the actual work when I downloaded it, and I did so twice, in one case the title was: The Succubus Next Door. Whether the author changed the title or something else happened, I’m not sure, but whichever title you might find that is from this author, I really do recommend you take the chance and read this work.

Tasha is a lost soul. There is really no other way to describe her really. There is an emptiness within her that drives her every day towards not seeing her worth, her ability and most of all, not having a reason to live. In all of this, she meets John when he saves her and then, does something she doesn’t expect.

John, is a good man. One that honestly reminds me of my Eternal in a lot of ways. He asks for nothing in return, he demands no payment, he is the one true thing in Tasha’s life that she needs. Someone that believes in her.

But she doesn’t accept it, looks for the traps, the real reason why he is so nice because there is no possible way, at least to her, that everything that John is can be true. When she finds him in the clutches of a Succubus, and Lilith at that, she hopes for release from this world through her. But when Lilith wants John and not her, Tasha discovers two important truths.

One, that she needs John and two, that he is her reason to live. And Lilith has no idea what’s about to happen next.

Lilith is the Succubus Queen you would expect. Powerful, self-assured. She knows that no one can defeat her, let alone a young human woman. Her victory is assured. But the thing of it is, when you have a reason to live, you can do just about anything to save that.

The story of Tasha’s life, meeting John, the moments of their lives that are interspersed with Lilith’s taunting and playing upon Tasha’s self doubts and worries are both thoughtful and at the same time draw a picture of just how black Tasha is inside.

Where the story goes from there, what happens, and in the end the choices Tasha makes are perfectly told and given life that isn’t seen in a lot of stories like this. While Lilith is core to the story, what pushes it forward and makes it what it is, she isn’t the focus of it.

Tasha and John are. Lilith serves to give light in the darkness and in that anything is possible.

Even for two humans lost in their world.

Really something wonderful, powerful and meaningful to me. I hope for more written in this world someday, but I’m thankful for this more than I can say.