Succubi Image of the Week 302

A Review of Ghost’s Night Out by Jenny Harrison 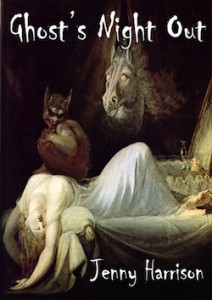 Ghost’s Night Out by Jenny Harrison

An Incubus story this time to review, it is a free work that you can find on Smashwords if you’d like to read it. It’s not a work of erotica, it’s more of a ghost story than anything else with a bit of a twist in it. The idea is a good one and the story itself is really well done for how short it is. However, for those looking for the Incubus in the story, like me, you’ll be hard pressed to find him. Though, in a way, the ending tells much more than you would expect. But once again the story leaves much to be desired. Mainly that it would be longer and as well that the main characters in it would be more fleshed out than they are.

Jaz and her friend Helen are ghost-hunters, helping to rid people of unwanted spirit manifestations. But when Mrs Smallman asks them to rid her house of an incubus, the results aren’t quite what they expected.

This work feels more like the introductory chapter of a much longer story. There is a good deal of setting up the world and the main characters which gives them personality and you get a good idea of how they came to me where they and and what they do. It’s all really well set up and it paints a really nice image in your thoughts.

The way the story is told in such a matter of fact way makes you think that the one speaking is caught somewhere between being bored in telling the story over and over again and wanting to get to the next adventure. Perhaps it is the way she speaks or acts, or the situation they are put in, but for the most part they seem uncomfortable with who hired them and what the problem is that they are to solve.

The appearance of the actual ghost or Incubus, to be honest it’s really hard to say which it is, is quite short and once it’s over the story runs towards the end and the surprise that I mentioned. It’s really a cute ending when you think about it, but that’s where my problem lies.

There’s a lot of world building and direction which feels like it’s all set up for something longer and more involved and it isn’t there. It would make a wonderful beginning to a mystery story, the first chapter at least and that’s the problem. I’d like to see more here, there’s a lot of promise in what is given. I hope that the author does, some day, manage that…

There is promise here, don’t get me wrong. My problem is that I wanted to see that and I didn’t.