A Review of Broken Dolls by B. R. Kingsolver 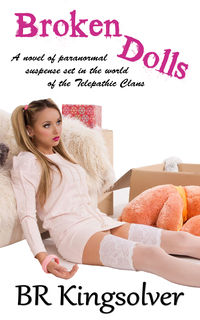 Broken Dolls by B. R. Kingsolver

I follow, quite closely actually, a series about Succubi and their families by the author B. R. Kingsolver. I have reviewed the first, second and third book in that series before on the Tale and I am simply thrilled to see a new work in this universe has been published.

Within this series there has been hints of a rather major problem, one that has a real world mirror. This new chapter in the series touches upon things that happened in the background or tangentially to the other stories in this series. It adds quite a lot to the universe as a whole, but as well it brings in another view of things that the main characters really never had. That is interesting to follow when you have read the other works in the series and even if not, this work stands on its own quite well I think.

Private investigator RB Kendrick makes her living nailing cheating spouses, digging up other dirt to help in a divorce, finding long-lost relatives, and occasionally sniffing out criminal activity and fraud.

When she takes a job to find a missing girl, she has no idea she is headed for the most dangerous case of her career. Usually, her ability to read minds gives her an edge. But when the people she’s hunting are also telepaths, that advantage is limited.

The search takes her into the dark underbelly of telepathic society, where anything, and anyone, is for sale. She discovers that telepathic women and girls are being trafficked as the ultimate sex slaves.

With people trying to kill her, she’s on the run, not knowing who she can trust. Will she find the missing girl, or become a victim herself?

One of the things that has brought me much joy in this series is that there are connections. There are connections in events, between people, families, and more. It is not that one thing happens in isolation with another but that they are all joined together into a larger story. Perhaps the one thing that stands out most of all is the importance of family.

RB is not quite like anyone that has appeared in this universe so far. Her best trait is that she cannot let go of something once she is involved and that draws her into something that shows her part of her world that she never knew before. It is in that discovery that her true nature comes out. She has a goal and woe to anyone that gets in her way. But beyond that, she’s funny, intelligent and whole within herself in spite of some of her past that haunts her in this story.

Overcoming that is part of her story here, but also it is the drive in her. To take a chance, to push into places and look where others would not. It really drives the story forwards and into directions that aren’t expected from the beginning of the story. I also loved seeing her own family, her mother and grandmother. Grandmother especially was a joy and I loved her quirks and thoughts through the work when RB needed her.

The work does draw some of its plot points from previous works in the series, but it is not necessary to know the backstory to follow along with what is going on. But knowing that story, RB’s reactions to the events and where that takes her makes connecting the plots quite interesting. Looking at the events that are mentioned from RB’s perspective gives a new understanding of what was going on that the main characters in the series were sometimes a little too close to.

There are Succubi of course in this work, actually quite a number of them, all with their own personalities and histories. There are some twists that are neatly hidden until the right moment as well. There is even mention of an Incubus here in a situation that is tragic in its own right. But the core of the story is as troubling as it first was when it appeared in the main series. Succubi connect to that obviously, and the scenes that involve what happens to them are troubling in their own way, as they should be.

There are appearances from several characters I’ve come to know and love here, but they are not made the centre of the story when they do. They support RB in her quest, but they do not take over or control the way things proceed forwards. RB holds her own among them and in doing so I think becomes in her own right as important as they are. She might not be the core of the series, but she is an important tangent to it. Her history, her future, both do make for some very interesting thoughts. She isn’t Brianna, not by far, but she is in her own right as much as presence.

The work is tightly written with little in the way of respites for the characters, especially RB. It is quite simply a page turner that keeps you immersed in this world from start to finish… And wanting more still. While some threads are closed by the climax of the work, there are many new paths opened to take the series forwards and I cannot wait for the this series to continue.

As with the other works in this series, I can only say that it is well worth your time and then some.

Many lovely questions answered, but so many new questions brought to the fore. I really hope that we will see more of RB in the main series as her story is far from finished. The universe grows, the tapestry becomes more powerful and enthralling… Everything I could have asked for and more.