Succubi Image of the Week 301

A Review of Gender Bender Succubus 3 by Maxine Albedo 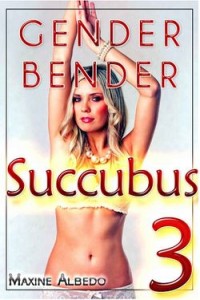 For the last two weeks I’ve reviewed works from an author that involved someone becoming a Succubus and that needing them to have a gender change. You can find that first review here. And the second book can be found here as well reviewed on the Tale. At some point in the series I expected that there would be a permanent change. It only made sense from all of the references that have been in the works so far.

It was also clear that, like the saying goes, what’s good for the goose is good for the gander. In this story both of the main characters are tricked and transformed. Lilith does, after all, like to be amused…

Two months ago Dean learned his girlfriend Emma’s secret: She works as a succubus! When she is too sick to go to work Dean offers to go in her place, and is magically transformed into a shapely succubus and sent out into the night. His performance was so exceptional that Lilith, Queen of the Succubi, offers him a job, to become a succubus and work for her, and embrace all his desires.

Now after two months of employment his demonic boss offers Dean and Emma permanent jobs as succubi. But when they move to hell they discover the truth to the demons offer: Emma must become a male demon, an incubus, and impregnate Dean to produce new demons! Can Dean go through with the offer and become a succubus permanently? And how will he handle to gender reversal, especially when it means he will be bred by his girlfriend?

Dean has been a Succubus part time for a while now and he’s discovered a few things. One of them is that when he isn’t a Succubus he craves it almost like an addiction. When he and his girlfriend are offered to become succubi all the time, he had little choice and agrees to it.

There is of course a catch and that catch is revealed by Lilith after they agree of course and that leads to Emma becoming Eric and Dean becoming Jasmine. I really wasn’t surprised when this happened as the entire story seemed to be going in this direction from the beginning.

The thing that saves this story for me at least is that there is more about the world of the Succubi and Incubi. The little peeks were interesting to me and I would have liked to have known more than we did. There was also a bit more about Lilith told, but nothing that really told more about her save that one part of her myth was noted in passing.

The way this story ended seems to indicate that this series may well be over, or at least it seems so. At this point the arc from the beginning for both of the main characters seems to be done with. Unless of course we leave Jasmine behind and Eric is the focus of the story. Considering that so far there hasn’t been much told about Incubi, save for their need to have the Succubi kneel in front of them and pleasure them, it might be a good change for the series.

As for Jasmine, she’s been written into a corner as it were and that’s a shame. I think there could have been a lot better things done than just putting her in a situation just when she has become a Succubus and has left her past life behind.

From my point of view this is both the weakest of the series and at the same time offered a lot of promise. The thing is that what might have been there is pushed aside for a few quick sex scenes and a bit of exposition. This could have been better and I expected more of it.

Not a bad continuation to the story, but short chapters over and over again bother me and I’ll probably stop purchasing this author’s works at this rate. I expect there to be a collection of this story at some point at the rate it is going…