Succubi Image of the Week 300

A Review of Gender Bender Succubus by Maxine Albedo 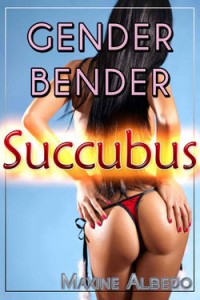 Some of the more interesting stories about Succubi involve a gender change. I really don’t mind that as, for me at least, I care more about the Succubus, when she appears and what she does than anything else in the story to a honest. One of the things that I wonder about most of the time is how the mental change is developed and if that change makes sense and “reads” as being logical in the story universe itself.

When Dean’s girlfriend is sick he offers to go to work in her place. After all how hard can it be to work in a sex chat room? But Dean’s world is turned upside down when Emma reveals her secret: she works as a succubus!

Before he knows what’s happening Dean is magically transformed into a shapely succubus and sent out into the night. When his client’s revealed to be Phil, his boss, Dean struggles with his new bodies desires and emotions. Can he resist his uncontrollable desire to enter Phil’s dreams and be dominated by him, or will he surrender to his new role?

The is one of the more unique stories about Succubi that I have found, and that’s not because it is a gender switching story, there are actually a lot of stories written with the same sort of idea. No, what makes it interesting is the overall universe, how Succubi, and Incubi for that matter, are created and how the entire situation plays out.

There is a good deal of internal logic in the story that, when you think about it, makes a lot of sense and that, for me at least, makes this a much more interesting story than it could have been otherwise. The only problem that I have with that is there are supporting characters in the work that I really wanted to know more about and all we see is a fleeting glimpse of them.

The transformation of Dean into a Succubus is really well done and I liked the form he took on, mainly because she doesn’t have hooves. Like just about everything she is described as looking like and that really make me like the story even more at that point. It was also well done how her thoughts were shaped and changed to fit her new world view. It was a subtle thing, which I like rather than having it pounded into your mind over and over again.

Once she enters the world of the Succubi, there is a lot to enjoy, the sex occasionally is a bit on the violent side, but I expected that to be honest. Eventually when she has to come face to face, or rather Succubus to dream with someone she knows, there is of course a lot of soul searching, but eventually things happen as you might expect them to.

The ending was cute and that’s where most of my thoughts fall. This really would be a good opening chapter to a longer story and I’d like to see it. There is so much in this universe that has been set up and not really used much and I would like to see more of the inner workings of things. I also have to admit that I would like to know more about the Incubi in this universe and as well about the two that are the Mistress and Master of the Succubi and Incubi as well.

It’s an interesting concept for a universe and I did want like to see more about it. It turns out that there is a second work in this series and that book I will be reviewing next week.