Another Succubus dance video on YouTube that is cute…

A Review of Second Succubus by Maxwell Avoi 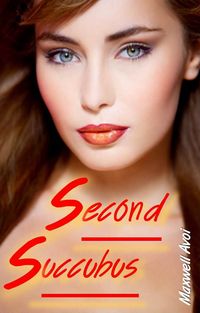 There are. when you think about it, really two main truths in the universe. On the one hand you have those that look to do dark things. To bring that darkness into others, envelope them with it, and then spread that taint as far as they can. On the other you have those that believe in light things. Compassion. Caring. Love. Understanding. All of the better traits that truly we should see in ourselves and each other.

The same can be said of Succubi really, if you think about it. They can be the ones to cater to more darker desires, or they can be the way to enlightenment….

To find that balance within themselves, and ourselves by knowing them… That, truly, is enlightenment…

A new succubus appears, one that wants to bring peace and unity to humanity. Opposing it are two FBI agents…and a gender-shifting creature from another dimension that threatens to destroy all that it touches! Conflicting forces battle for the future of human kind.

Set in the same world as Tesla’s Succubus, this book doesn’t require reading the first story, but it’s recommended.

Quite some time ago, this author released a work called Tesla’s Succubus, which I reviewed here on the Tale. At that time, I had several unanswered questions about the beings that were, in a way, Succubi. I wanted to know why they did the things they did, what their purpose was, and most of all, why it was that they were more… animal-like or predatory… With this, a second peek into this universe… I have more questions, but I also have quite a lot more to enjoy…

This work has a taste of mystery within it, on several levels, that is nicely played out over the course of the story. I found it a lovely touch to have what I would consider dark and light Succubi existing. Now neither of them have horns or tails, nor are they physically Succubus, or for that matter, Incubus, in their appearance. They do have the ability to shape-shift, to see into the minds of others and draw on their wants and needs. Where the difference comes is that one side looks to be based on what I would call animal needs while the other is based on compassion, love, and so much more. It’s quite a thing to watch thread its way through the work, what it means to the characters in the story, depending on which they are “possessed” by.

As in the first work, there is a touch of TG aspects, but it isn’t overwhelming by any means and what I particularly liked was that when these themes appear, it is for a purpose. It isn’t the typical “I have breasts! Have to explore myself” theme. It is a transformational moment for the characters that are changed in this way, but it is also one for those that do not switch gender. The changes that come, on either side, light or dark, are telling for each, in their own way, and help to drive the story forwards. The comparison of both, the ways and means of their lives really is core to this story and a gripping read.

I still have many questions about the creatures however. Really there isn’t a lot of focus on them, no real understanding of them save for passing thoughts and feelings that the characters tell us about. Perhaps it is that mystery that makes this work special in its own way. The story is of the changed, not the changers.

The personalities in the work are well defined, their actions make sense and are not strange or wrong as the work goes on. There is a truth to each one, and in the end we see that truth appearing quite clearly. Transformed yes, but their humanity remains with them and, for me, the best part was when that humanity was revealed.

There are moments of strife, of conflict of course. Some of these carry over clearly from the first work. It was nice to see the author make the connection to the previous book, and also give us a name for the main character of the previous work. I also was very happy to see a resolution to their story after all they had been through.

The new Succubus, like the first told of, is a TG transformation, but the event in this story is well described and plays out very smoothly and makes a good deal of sense. I have questions about how exactly it all started, the beginning of the work is very unclear, at least to me. Mind you the uncertainty and self-questioning along with self-discovery was interesting, I did take pause at two points within the first five pages of the story to put straight in my mind the scene and the being that begins the tale. I’m not entirely sure about the start of the story, but once past that, the rest of the work really flows nicely from moment to moment.

For the most part, the ending was satisfying, though it does leave several paths for the story to take in the future. Compared with the first work, this one has a purpose, not a word is wasted, and in the telling of this story comes an important truth. One that I have always believed in and it was nice to see that here. Sometimes the simplest things make for the best stories and I think this work is one of the author’s best by far.

Really an engrossing tale of truths that everyone should believe in. Still questions to be answered, and I wish they had been here. Still there is much more story to be told in this universe and I await quite eagerly for the next part of the story that I hope is still to come…