Succubi Image of the Week 299

Another Succubus dance video on YouTube that is cute…

A Review of Hope by Emma South 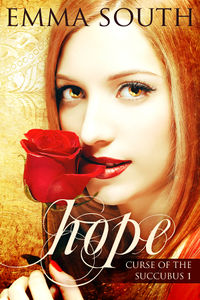 It is important, to me at least, that the opening of a series has one very important thing in it. It isn’t so much the erotica or the themes within that matter as much as the characters themselves.

I like to see real, true, emotional characters with a past they do not ignore or forget. A history that has shaped them into the people they are and that they remain true to who they are from the first to the last.

Beyond that, everything else adds to what they are. It means more that they have a connect to each other and themselves beyond what is said in the story itself. That in the end, one thing is very clear about them.

That they have, no matter what may be, hope in what miracles are in their lives…

Mary was born into poverty over a thousand years ago. When the rich, powerful, and sinister Sylvester gave her a chance to alter her fate, a chance to escape the shackles of the peasant class she was born into, she takes it. The naive girl didn’t know exactly what was going to happen to her, but the reality wasn’t like anything she had imagined.

Now she has been cursed to roam the world as an immortal Succubus, a smoulderingly sexy temptress irresistible to all mankind, an unwilling agent of inhuman evil, until she conceives a child by a man who loves her rather than lusts after her. Centuries of evidence has convinced her that such a man cannot exist.

That is, until she meets Clinton in a small town called Riverfield. Both of them have known the extremes of emotional pain in their lives, but that could be what makes each one the other’s saviour. Can they fall in love before her curse brings the entire town down on top of them?

There are many things to like about this work and the first of these is Mary herself. While she does not have the appearance of a Succubus in the traditional way, that meaning she has no horns or tail, her tale of how she became a Succubus is really, for me, one of the most engrossing parts of it. It isn’t so much the how it happens, but what she sees, feels, and thinks that is a change from how such things are normally done. While there are some echoes which harken back to the more… brutal legends… It isn’t about that so much as how Mary tries to deal with being cursed to be a Succubus.

This means that she cannot stay in one place too long and there is something odd about her eyes. Two very important threads in the story which come to haunt her over and over again. Thinking about what the curse means, it makes a great deal of sense what happens as things progress along.

The most difficult part of the work for me was when Mary managed to lose her hope, force it away from her and try to live what life she has. But then, in her darkest moments, she meets Clinton and the story becomes very interesting. The emotional confusion from Mary is intense and very real and true to who she is. More so, the reveals about Clinton are heartbreaking and make him a strong presence in the story as well.

His past and what, ultimately, he has to face in understanding Mary, but also seeing within himself that ties the threads together. I did feel that at one point, when he confronts Mary about what she has done in her time near him, felt a little less true to who he is. His language changes a bit and while I could understand why that happens, it just didn’t seem right for the words he uses.

That is a little nitpick I know, but, really after getting an idea of his personality in my mind and his voice as well, that change just… felt odd. I did mention hope for Mary, and in truth there is within Clinton hope as well. It’s the connection of both, the need to believe in hope and the loss of it, that makes the connection, the spark between the two… perfect.

Beautifully written, warm, real characters forced together and at the same time has them draw from each other the strength they need. It’s not often that a Succubus story makes me cry, and this one did at so many turns.

The story ends, regretfully, at a point which leaves so many questions unanswered. I won’t spoil those questions here but to say that the mark of a good storyteller is to leave you wanting more when the story is done. This one certainly does that and I will be looking for the next tale of these two whenever it should appear…

The author has indicated they expect two more parts of Mary and Clinton’s story to appear and I will be looking for them whenever they so.

For they have hope.