Succubi Image of the Week 298

A Review of Blizzard by Taryn Kincaid 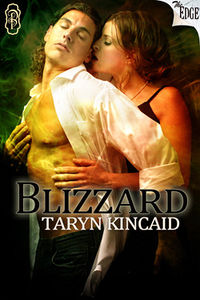 The next work in Taryn Kincaid’s Sleepy Hallow series, Blizzard, has a few things about it that make it a departure from the balance of her stories in the series. There are no Succubi appearing in this work, the last of the three sisters appears in the next work Heat Wave. The thing about this story, compared to the rest of the series is that, overall, it seems somewhat out of place with her other works.

What I mean by that is the running theme in the series, about 1NightStand and the effects of Madame Eve aren’t part of this story. It also sets up a moment that seems… odd… overall. Mind you the twist in the end of the story is something I didn’t expect…

This work is the story of:

Mandy Malone ditches her pharmaceutical convention and the married male colleagues hitting on her to hurry home to her waiting family. But she doesn’t bank on the blizzard that forces her off the road and into a deserted rest stop. When she meets another road refugee, their attraction is immediate and molten hot. Suddenly, getting stranded doesn’t seem like such bad luck after all.

While this story has a connection to Sleepy Hallow, it is mentioned right at the beginning of the work, it… doesn’t feel like the rest of the stories in the series. The theme of the previous works was someone looking for love, contacting 1NightStand, and then Madame Eve worked her magic to draw the right people together. This theme… just isn’t in this story. It begins as Mandy, trying to make her way home, gets stuck in a snowstorm She then meets Jack quite literally in the middle of nowhere and almost immediately Mandy becomes enthralled by him and has a “one night stand.” They have their moment, a very hot one, and then the surprise appears just after the climax.

It felt like it was a new beginning to another series of stories in a way. By that I mean it had a different tone, different style… just different as a whole. The first time I read the story, I found myself questioning a lot of the motives and reasoning that Mandy used. I couldn’t see why she made the decisions she did or why the story went in the direction it did. There are clues, rather subtle ones, that I missed to be honest in the first read which I picked up in the second once I knew where the story would wind up. To my surprise I found that I enjoyed the work a lot more having that knowledge and noting the hints along the way.

I think that emotionally I couldn’t find my way into the story taking it at face value the first time I read through it. The second time I felt the true emotional connection between Mandy and Jack, and that connection changed how the story “read” to me.

As an aside, none of the characters that have appeared in the previous works appear in this one, which is again, slightly odd. It is however the story of Mandy and Jack, tightly focused upon it, and having any of the Succubi sisters mentioned, or their loves, would have seemed… off. At least in this work it would. As a standalone story, it works really well… I just have problems trying to fit in into the Sleepy Hallow series.

This coming Sunday: A Heat Wave caused by a certain Succubus sister…