A Review of Frost by Taryn Kincaid 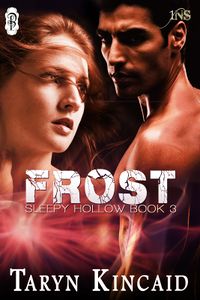 Succubi are not, of course, the only kind of… well, personally I don’t like calling them demons, but I’ll use that term for the moment, who are linked to sex.

There are others, some more… focused… on being unashamedly… male. Now that isn’t a bad thing, far from it, but along with that comes a personality that is both at the same time enthralling and aggravating.

Perhaps the best heat comes when fire and ice mix? I would think so…

This work is the story of:

Maxwell Raines, a fire-sex demon, lives a life of solitude and seclusion behind the walls of his compound at Sleepy Hollow, channeling his lustful impulses into his art—until his muse deserts him and his temperature rises past the danger point. He needs sex. Now.

When Madame Evangeline arranges a torrid Valentine’s 1Night Stand for them, will the flames of their encounter be too hot to handle?

Dagney, the middle of three sisters, sort of falls in-between her younger sister being cute and her older sister being a vision of the classic Succubus. It isn’t just that her personality falls between the two, physically she also straddles the two ends of what some feel is sexy or seductive and as such she calls to many a suitor… The problem is that they don’t exactly call to her in return. Valentine Day is coming but Dagney hasn’t. Not for a very long time. She’s become ice and wants some fire.

Maxwell is an artist with heat and fire within him, which considering he is a “fire-sex demon” makes sense. But he hasn’t found the one to quench his fires and when he has tried to be intimate… it never has ended well for the other.

Dagney tore at my heart strings to be honest from the first moment she appeared in the series. There was something… sad I think… about her even in the short conversation she had with her sister. This story just brought that to the fore from the first moment and I felt rather tragically so. She was not so much a character as someone with some real problems in her life. There was so much background that didn’t need to be said for all of her own reflections in the very first scene of the work.

Maxwell… At first I wasn’t quite sure about what he really was like. That’s not to say the real Maxwell didn’t appear in the story, but all of what seemed like stereotypical male bravado smothered him I felt. Once that was past, and he met Dagney… well… then things heated up nicely, but also his real personality, the one guarded much like Dagney’s was, came out and that made an immeasurable difference to me.

When the two finally meet, the repartee is very delicious and sensual. The things done and said are perfect for the two in one way, but in another they are tragic. There is a disbelief, really on both sides, that they might have found the one they are seeking. That is less so on Dagney’s part, but the hesitation, concern, and almost grief from Maxwell is very clear. It does hurt, quite a lot really, between their first touch and the moment before the climax of the work. It felt right for Maxwell, but the pain I felt for Dagney was as strong.

Lily, Dagney’s sister, and her love Campbell appear appear again in this work and it was nice to see a little bit of character development there, how those two are entwined more and more. It was perfect for those two and felt right for them. I might have liked Lily to have more time with her sister before rushing off after her beau… Perhaps that will be sometime.

An almost casually tossed out comment from Dagney about the new Succubus Queen being “not as evil” as the one before really captured my attention. I have some very high hopes about her and should they come true later in the series I think I will be very pleased to put it mildly… I have a feeling that when the shoe drops about her, one of my questions about a certain often mentioned character in this series that hasn’t been seen yet will be answered.

I still think that the Succubi need, at least once, to have horns and tails, but that’s just my personal preference speaking…

I just fell in love with Dagney and Maxwell from the beginning. A lovely couple that do really find their match in the most wonderful way. I also am very intrigued about a certain Succubus Queen that is mentioned, if briefly, and what she is like. Two of three Succubi Sisters, both of whom are not, thankfully, stereotypical… I hope the third meets my expectations when she arrives on the scene…

This coming Friday: A Blizzard and the heat to melt it away…