Acceptance – Part I By TeraS

A Review of Lightning by Taryn Kincaid 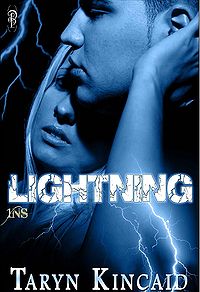 I have a certain view of Succubi and Incubi which is not close to the norm. To me they are more than they seem to be. They have the capacity within themselves to feel love, regret, passion… to be human if not truly human. It is that part of them that makes for me a story.

To discover in themselves and for themselves that what they believed was the truth… isn’t exactly the truth. That perhaps, when they find it, they understand that sometimes the saying is true. That love can, truly, heal all wounds.

And isn’t that really what makes the best stories what they are?

In mystic Sleepy Hollow, succubus Lily Night put her prom date, Campbell Jones, into a coma after a night of wild, unbridled sex. She has steered clear of mortals ever since, afraid of damaging them or worse, not to mention the inconvenience of knocking out the power every time they have sex.

Successful architect Campbell Jones has lived with strange powers and a sexy secret since that prom night. He’s buried himself in work to forget the woman who’d dumped him at the ER then vanished from his life without a trace.

Neither Lily nor Campbell have forgotten that night or the love they’d shared. Will a 1Night Stand help them bury their past?

Lily is miserable and has been for quite some time. Almost killing your first love, blaming yourself for that, and having to leave not knowing what happened to them does awful things. She holds secrets within herself tightly and cannot bring herself to discover who she really is inside. Campbell is a lost soul in the world. Something happened to him that he cannot explain, or understand. What’s worse is that he cannot forget Lily but cannot find her. Circumstances bring the two of them to a rather exclusive dating service as their high school reunion approaches… and with it, comes something neither of them expected… a one night stand that is more than it seems…

Lily isn’t the only Succubus in this story, she has two sisters, Zena and Dagney. Zena is well over the top and if not quite the stereotypical “all about sex” Succubus, she’s fairly close. I will admit that I couldn’t help but laugh at her antics in Lily’s office at the beginning and she endeared herself to me with them. Dagney I really didn’t get much of a feel for, but there was something about her that seemed, at least to me, make her a bridge between her two sisters. One power that they showed was being invisible while seducing a mortal, which I thought was really well done. But there was something off about that scene and I think it was that Lily talked to her sisters while a mortal was in the room. If her sisters were invisible, then she would seem a little off and that bothered me a touch.

Lily herself was wonderful in many ways… She doesn’t want to be like her sisters, which I loved, she wants something other with her life, which I wanted for her, and she has a personality that just held me through the work. Characters should have a past which they remember always, and Lily does. I also enjoyed that she does not like being called Lilith, her true name, but Lily. That suits her much better in the joys she finds and the pleasures she feels through the story… Calling her Lilith would have wrecked the sensuality of the moments between herself and Campbell and I am glad that didn’t happen.

Campbell was a contradiction at times. There is the passionate lover but within that is the lost soul who cannot understand, cannot find their salve to their wounds. He is both fantasy and reality in the same moment which makes him a lovely foil to Lily herself. He holds onto his past, needing it, wishing for it, and in needing Lily finds that his successes in like are not as important as she is. The more important thing is that, in truth, the same can be said of Lily from the first moment of the story. Connections matter. In this story they are everything…

I know that I will love a story when in the first few pages I have some tears, some laughs and a sense of wonder about what will come next. To be able to connect characters together in that way, to have them be real on the page and in your mind is… special. It doesn’t hurt to have the core of the story to be between two souls that are seeking each other. It doesn’t hurt to have those souls touch again, fall into the old ways they shared again. It isn’t wrong to have those characters entwine themselves in a way that is truly special for them both. It is the way good stories, never mind good erotica, should be written.

When the erotica comes, it isn’t crass. It isn’t over the top. It is sensual, lovely, and delicious. The moments between Lily and Campbell cover all of the emotions that I would expect them to have finding each other again. The internal monologue from each, especially when Lily was blindfolded, made my heart ache and that was something that hasn’t happened in a story for some time.

By the end of the work I was taken by two thoughts… One was that I would have liked perhaps a bit more about Lily’s sisters. They were interesting and while I didn’t completely care for them, I did smile and I would have liked a bit more of their personality to come out. The same was true of Campbell’s brother… which makes me ponder the three of them being together…

The other thought that I had was the one that I always have when I read something I enjoy… It was a bit too short. I felt like there was a passage missing in the middle of the story, a few pieces of information that I would have liked to know if for no other reason than to add some colour to this universe as a whole. I do realize that at the time the author probably wasn’t thinking about the stories to come, and there are which I am quite pleased about. Still, the gaps in knowledge about the world of the Succubi and Incubi here would have been nice to learn a bit more about…

…I expect that will come…

I really do love Lily very much… Her sisters perhaps not as such even with how little we saw them. And Campbell was simply delicious and perfect. Everything that I could have possibly hoped for in a Succubi story save one little thing. I really would have have loved to see a hint of horns and tails… But then I am biased aren’t I?

This coming Friday: Thunder and we shall see who happens to come… I can hardly wait…