The Question was asked: What makes a good Succubus?

A Review of Sex with Succubi by Alex Excuse 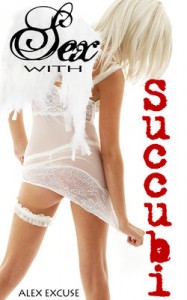 Sex with Succubi by Alex Excuse

Some stories can be, at least to me, somewhat confusing. Sometimes that comes from being dropped in the middle of something happening and not getting what’s going on for a while in the story.

Sometimes the problem is that you go into the story expecting one thing and you get something completely different. When both of these things happen it’s troubling and tends to make me not enjoy the story…

Malice is a Succubus… maybe. She doesn’t actually call herself a Succubus nor is she referred to as one in the story itself. However from her need for sex, and some other hints, it’s fairly obvious that she is a Succubus. The problem I have with her is that she’s not that much of an interesting one to me.

Most of that is her attitude, a lot is just how much of a “don’t care, screw me” view of the world she has. She doesn’t appear to have horns or a tail, she’s more of a punker than anything else and she just drips with that attitude… and all of the people she is with as well. Most of what happens to her is violent and brutal up until the point where her master/boss Gabriel sends her off to do something different which she messes up and things turn in all sorts of directions for her.

There is a lot of sarcasm in this work that hits just about any sort of topic you can think of and for the most part it didn’t do much for me. I will admit that the ending was a surprise and it gave me something to ponder, but overall I found it hard to read through and stay focused on it as a whole.

It’s difficult to separate the humour from the mild horror at several points or the sexuality for the flippancy of the story. I had the feeling that it seemed like two different stories were tacked together and made to be a whole. I just don’t think that this worked all that well.

Just didn’t find that I cared by the end about Malice or anyone else in the story. That bothers me because it doesn’t happen often…