Succubi Image of the Week 295

A Review of My Personal Trainer is a Demon! written by Bellatrix Turner 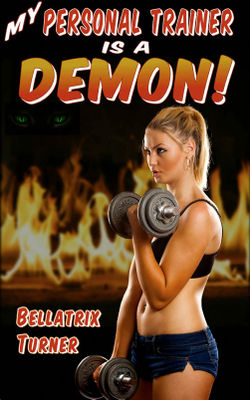 My Personal Trainer is a Demon! written by Bellatrix Turner

Some story ideas I admit make me laugh or shake my head in disbelief. Occasionally that is tempered by a realization that the idea is unique and interesting in its own right. But it still makes me laugh.

Whether that is the situation, the characters or something intangible, the erotica is just overwhelmed by the silliness… at least in my eyes it is. But then you also have to consider the question of getting your own desires and what you would do to make that happen. If you can overcome the laughter that is…

I think, for the record, this has to be the funniest piece of erotica that I have read in forever and that’s saying something. It’s an odd combination of that old saying of being careful what you wish for. Because sometimes what you get is a lot more than you expected it to be…

College student Abigail has been cursed by the dreaded Freshman Fifteen. When she runs into a friend she hasn’t seen since the beginning of the semester, she’s shocked by how good the other girl looks. Abigail would do anything to look that good too! But the personal trainer’s got a secret — he’s an incubus, and he’s going to fuck the pounds right off of her!

Abigail doesn’t like what she looks like and will do anything to change that. A friend tells her about a trainer that is “otherworldly” and she goes to see him. And then she finds out what the training involves…

And the answer to that is, simply, sex with an Incubus.

It’s just hilarious as far as I am concerned story wise, the build up in the story is all innuendo and hints and looks before the contract comes out and then the real fun begins. There is a hint of mind control in that part of the story, actually it’s very obvious at several points. That was a bit of a problem for me as it wasn’t subtle in nature but more like a mallet being used over and over again.

Which brings me to the erotica itself. It wasn’t so much hot for me as… well… over the top I suppose is the best way to put things. It was very much the Incubus taking control and making her want and do the things he wanted with the occasional dirty talk thrown in. I didn’t really enjoy it because it was mostly bump and grind with not a lot else going on.

The end result of all of they did was, again, hilarious, and while it was, it didn’t make me really enjoy the story like I was expecting to. I think the problem was that the build up was promising and then… it wasn’t what it could have been.

The writing itself is good, but… I just couldn’t get into the story for the silliness of the premise, the harshness of the Incubus and the self absorbed attitude of Abigail…

Basically it is a sex story with a lot of humour in it. While that has its own attraction… It really didn’t for me.