Succubi Image of the Week 294

A Review of Succubi Seduction by Amanda Ramsay 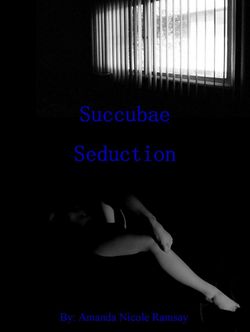 It has been a peeve of mine that short stories, and I mean the ones that are short enough that you can blink and miss a lot of the story, bother me.

Now, if that story can hold my attention, that makes it better. If that story has a theme I didn’t expect, that’s better still. What does not, however, is when there is a story begun, the tease takes me and holds me to the story and then… it ends.

That really shatters the faith I have in the work and then my thoughts are… why stop there?

The summary of this story is:

Mary wakes up to the attention of a creature she didn’t know existed. A Succubus. Can she resist?

Mary finds herself at the mercy of a group of invisible Succubi who have their way with her. That in itself is interesting as a story, but here’s the problem with this one. The Succubi in this story, or at least some of them, are male. So as that seems to be the case, wouldn’t they be more correctly Incubi?

It’s not that much of a story killer in itself, but couple that with several word errors in this story such as “meeting a small pert of her need” were bothersome and creeped in much too often for my liking. It’s another example of an author writing and then not having an editor and, again, if someone is selling a book for whatever the amount, you expect some kind of care like editing to happen. Especially in a six page work.

That then brings me back to the length of this work. The six pages come and go, as does Mary, and then… it ends with questions to be answered which aren’t. I do understand that this is another of the hot flashes that seem to be the “vogue” thing at the moment, but honestly there is a story to be told here. The Succubi, again, more accurately Incubi, are mysterious and it would be a path to follow with something to be written about. The end of the work, what Mary finds when all is done… Why was that there? Did it cause what happened? Did Mary bring this upon herself or did someone set her up?

Too many questions left and if the author had at least tried to answer some of them, then this story would have easily been double the length it is.

It is not awful, not at all, but a bit more care, a bit more thought and this would be something very special…

Too short. Far too short. Six pages and then nothing more does not endear a work to me even if the beings within the story do. Nor does not proofreading for errors that should have been not there…