Succubi Image of the Week 292

A Review of Succubus Dreams by Kaylee Fox 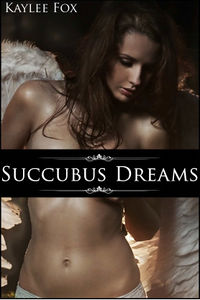 What are dreams made of? Some say that dreams are wishes or hopes from within that we never quite hold in the real world… Dreams are, when you think about it, an integral part of the Succubi in all of their forms. What is a more thoughtful concern is; what if that dream is more than a dream? What if it is the means to change a life, heal a soul, and in the end, allow someone to find closure when they never could before?

What if. What if you found you were the means to that end? What if you had no choice in answering the call? What if you knew what you had to do, had the power to just make it happen? Would you do so or would you actually do something good?

It is, in the end, something that can bring about something wonderful… if you try…

After a lifetime of dangerous sex with strangers, Madison finally takes one risk too many and meets her demise. Upon waking she finds that she is in Purgatory and is now a succubus – a supernatural being that knows and fulfills your every desire.

Sean is a frustrated artist who shies away from the public eye. Enter Madison who must use her sexual charms to penetrate his stony exterior by any means necessary.

Can she use her powers to awaken the hidden sexual desires within Sean?

Madison is a self absorbed woman who really doesn’t care much about anything or anyone save her own gratification. And she does so up until things go very wrong and she finds herself in the presence of a Succubus Queen. Madison learns that her past has set her upon a future that she didn’t expect and that means…. she is now a Succubus. But what does that mean? How does she handle it? And what happens when she discovers what it truly means to be a Succubus? She learns that her own needs aren’t what matters any more, but the souls she touches are. Life lesson number one, you aren’t the most important thing in the universe Madison.

I think the first thing I have to say is that I didn’t like Madison at the beginning of the story. Her attitude, her style, everything that she was rubbed me the wrong way. Now, to be clear, that was before she… well… let’s call it turned a corner when she met the Succubus Queen Catalyna, but I’ll get back to her a little later. Madison’s attitude gets an adjustment, a really needed one and that was the point at which I found that I started to like her more. She isn’t perfect, but then she really isn’t perfect in a lot of ways that she discovers through her lessons with Catalyna, meeting Sean, and finding her way through what becomes the first time she touches another soul and learns about their needs. Life lesson number two, there is always someone that can teach you a think or two.

It’s actually an interesting moment when she realizes that she cannot do what she wants to, or could do in controlling or forcing Sean to do or be what she knows he wants to be. That brings me to Sean. From the moment we meet him in the story there is something that haunts him and continues to do so. What I liked was that the answer to that mystery doesn’t come until the very end of the story… and it’s perfect. There are possibilities and hints but nothing really specific which draws out the reveal really well. There is a lovely bit of closure in his life that makes the story before much more than a simple piece of erotica. It brings up a question that is haunting in many ways. Life lesson number three, we are our own worst enemies in the worst possible ways.

Catalyna is… well, she’s interesting as a Succubus Queen. I did rather enjoy her teaching Madison how to use her powers. More so how much control that Catalyna had over those in her domain and how simply pleased she is to teach the ways of the Succubi to those around her. I’ve always liked Succubi to be strong, imaginative characters and she has quite the imagination. Her world, the world she calls Purgatory really seems not to be quite that way, more of a place where some are given a chance to find themselves one way or the other.

Lovely heat in the story, the scenes between Sean and Madison are very hot and when she becomes a bit more dominant and Sean’s world begins to change, then things become a bit wild and forceful in nature. That’s not a bad thing, it’s an interesting reflection upon the beginning of the story I thought as a whole and what happens in Purgatory to Madison when she is in Catalyna’s hands.

There are a few minor spelling and grammar mistakes in the story which thankfully did not take away from the tale as a whole. Sean was wonderful as a character as was Madison when she turned herself around at  Catalyna’s hands, and Catalyna herself is someone that I would have liked to know more about for a lot of reasons.

As well, their universe, their so called Purgatory, is a very tempting place for stories to be told and hope that some might appear sometime there as well. As for Madison herself the work ends on a lovely scene that for some readers will be very familiar if you were a child of the 80s or watched one specific television program then.

A really neat story to start a series, which I hope the author does continue sometime, and I think that Madison will have all sorts of moments to discover not just what others need, but who she is as well… After all it is not the climax that makes a story but the anticipation of it…

Lovely heat, an interesting view of Succubi that I found fascinating, and a story that in the end was something more than I had expected from the beginning. I think one more pass for editing would help a smidge and otherwise I would have liked the moments between Madison and Sean, the ones where she asks questions of him, to be a bit longer.