Succubi Image of the Week 291

Yes, it is a YouTube of a Succubus, but otherwise?

A Review of Mommy’s Little Succubus by Katie Blu 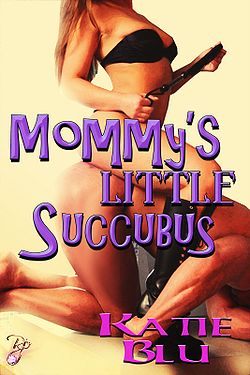 One of the things that isn’t really touched on in most works about Succubi, or Incubi for that matter is, who are, if they have them, their parents? It’s actually important, at least to me, because that gives a lot of insight to the Succubus or incubus themselves. Now, for the most part, it’s something that most authors ignore or gloss over… But what if there was a bit more to learn and think about?

Would it explain why a Succubus was good or tried to be? Would it open your eyes to understanding why they were evil or cruel or something similar?

What if, in a way, they where adopted by someone, and that someone they decided to call… Mother? And what would that person do in order to help a young Succubus to get her wings?

It’s an interesting concept if you think about it…

Mommy, an immortal mother-thug, only wants to help when wayward paranormals wander into her diner…

Succubus Liza needs to earn her wings. But what’s a klutzy, bespectacled girl to do when she’s born without the seductress gene—and that’s the only way she can earn her demon wings?

Fortunately for Liza, Mommy has a solution, and he’s chained up in her dungeon.

Liza is a Succubus. Well, not quite fully as yet. She needs to seduce a man, take his soul and then, finally, she’ll have her wings as a Succubus and be complete. There’s a way that Mommy, her guardian, has put together to make that happen. Question is if Liza can overcome herself and succeed.

I have to admit that when I was reading this work I had thoughts in my mind that Liza was very much like Chloe from the Eerie Cuties online comic series. They both don’t believe themselves to be “good” Succubi, they don’t have the self-confidence or will to be more than they think they can be as well. But most of all, it’s the complete lack of coordination when trying to be sexy that just merges the two characters together in my mind.

That said, the way Liza acts in this work just struck me as a teenager. A very young one without a clue about herself and what she was capable of. The way she haltingly makes her way through the scenes is both cute and somehow… off. I think the problem is that the way she is described makes her faults more central than her abilities. That said, when she finally gets past the point of not being sure, of not knowing… She’s a lot more interesting.

The same can be said of Peyton, who is the man that Liza finds chained in the basement. I won’t spoil who he is exactly, but when he explains himself… I kind of expected it. What I didn’t expect was that the attraction between himself and Liza would be so complete so quickly in the  story. Now, it is a hot flash, so it has to be that way, but really I would have liked some more about him too.

Mommy is an enigma. This work is part of a larger series in which the characters work at a diner that Mommy owns and all of them are supernatural beings of one kind or another. That brings the question of who, or what, Mommy is. That isn’t explained in the work, but, she does know so much more than she reveals… in a lot of ways. I would have liked to know more about her too.

There was really nothing in the writing that took me out of it, but as always with works that are short and come to an end just when things are getting interesting… this one does. I could have seen this being at least another eight pages long to tie up things well and bring it all to a conclusion… But instead we leave as things get just that much more interesting as a whole…