A Review of Dirty Demon by B.B. Roman 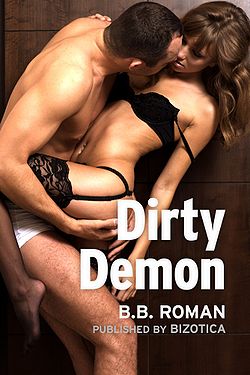 Time for a review of another story that has an Incubus in it… It is a hot flash, which is disappointing once again… I really don’t enjoy that when it happens, I’ve said that a lot I know, but honestly why start what could be really interesting and then allow it to fall apart?

Millie is 23 and struggling to find a boyfriend. When her friend Shandra offers to summon a sex demon to help keep her busy in the bedroom, she agrees, thinking it’s just a joke. But when Millie’s alone in bed that night, she quickly learns that she’s not really alone. There’s something in her bed—and it won’t stop until she has the orgasm of a lifetime!

Millie and her best friend Shandra get drunk and Millie is given an Incubus to have fun with for one week. In short, that is what this hot flash is all about. However, we don;t get to see the week’s worth of fun and games, only the very first night in which Mille is taken in just about every possible way by her Incubus.

One of the things that I thought was a new slant on Incubi was that he didn’t appear as himself. Until the moment that Millie thought of the man she wanted to be with, he was invisible and used his powers to pleasure her. Once she had thought of the form she wanted him to be, then the story moved into one very long sex scene that built its way towards its climax in more ways than one.

And here, again, is the problem I have with these short stories. Very little background, a quick introduction, then to the sex, and a quick closure of the story leading to… Well, we never know what it leads to. There is a core of a story here, even if it only was to show Millie’s week with this Incubus. Even if that was all that the longer work would be, there are warnings in the story to Millie that would have made for some conflicts to be told.

One of the main ones being that while Millie is with the Incubus, she should never have sex with any man for the Incubus would be jealous. As well, her friend’s promise that if she liked this Incubus… she could have another one.

I wonder what that would result in? Jealous Incubi fighting over her? Or something more than that? All of these are questions that the author could have weaved into a much longer and interesting story than the hot flash that is given here.

Still, all I can do is wonder about what could have been…

The erotica is hot, I enjoyed the physical aspects of it very much. I also liked that there was a nice use of power by the Incubus to hold Millie and then tease and caress her until her wishes were granted and she came wonderfully.

I am, however, not thrilled by the ending, I wanted more than was given here. As I said, there are so many open thoughts, possible plots, and moments that could have easily transformed this from a hot flash into a novella that it’s a shame that the author didn’t go forward with them all.

Perhaps they will? It’s something to hope for at least…

Hot flash yes, but it could be so much more…