A Review of The Deal by Amanda M. Holt 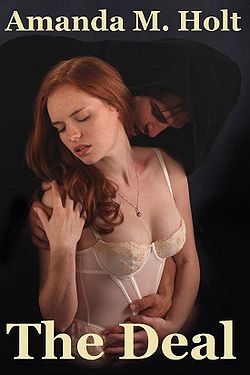 The Deal by Amanda M. Holt

Another short book this week with an Incubus as one of the main characters. I have heard, from some authors that they would sell their souls for a book contract, fame and fortune… So what happens when an Incubus appears and gives one writer no choice in the matter? What does that mean in the grand scheme of things anyway?

Alessandra had an unwelcome visitor last night. The incubus, Daragon, was intent on forcing the author into a soul-binding contract that she has no intention of agreeing to. Last night, she resisted his temptations and his torments, but only just…

When Daragon comes to Alessandra for the second night in a row, he puts the same deal before her. Will Alessandra be able to deny him a second time? If she’s able to decline, will he give up and move on to another victim?

Her very soul is in jeopardy if she gives in to…The Deal.

The thing about this story is that we don’t actually come into the story until it has been going on for a while. That is to say we don’t see when Alessandra first encounters Daragon, we don’t find out what he has done to her, save for marks and scrapes. We just have a woman in obvious discomfort facing her attacker for the second time and knowing that she can’t hold out forever.

Daragon is a classic Incubus to me at least. He fishes into Alessandra’s mind, discovers her secrets and then uses them against her… over and over again. There is no kindness, no love, no warmth from him at all. For him it is simply business. He has always won and expects to again with Alessandra.

As for looking like an Incubus, Daragon really doesn’t show much of that save for his eyes having flames within them and of course his ability to shift through different forms to tempt Alessandra. He also has the ability to play with her body, not just sexually, but emotionally and in how it acts.

This of course places all of the power in his hands and he is not shy about using it. And for what purpose you might ask? To claim Alessandra’s soul and have her write best sellers for another’s purposes. Considering that she is an author, it surprises me that other temptations wouldn’t have worked better.

While Daragon appears throughout the story, there is a mention of Succubi and of Lilith at one point which I wanted to know more about, but it is only a passing reference and so wasn’t explored at all.

Overall it is a good read, one or two little grammar mistakes, but nothing major to speak of. My main problem was the overwhelming force that Daragon attacks Alessandra with. He claims that she has free will, but then tells her that she either relents to him or he will return again and again until she does. Why is that? Normally in stories like this, if someone resists an Incubus once, then they are free of them. It is of course the author’s choice in this story how things work, but it makes for a sad commentary I think as well.

I think that seeing the events unfold from the beginning would have made for a better story. I believe that the ending was unsatisfying and needed to go a bit further as well. It ended at a point where Alessandra was being forced into a change of direction, a purpose and a future that wasn’t what she expected. More than the person she was going to have to deal with now left me with questions unanswered, though I have my thoughts about that as well…

Didn’t like the bullying theme all that much, the concept is a good one of how sometimes you can get what you want, but the cost is more than you can possibly imagine. Not enough back story, and I would have liked to know more about how this all turns out for Alessandra in the end…