Succubi Image of the Week 289

A Review of Suburban Succubus 3 by Jane Mesmeri 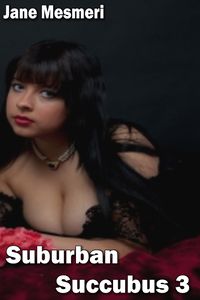 The series follows the changes that happen in the life of Janine when she is transformed into a Succubus by her new neighbour Katrina. The thing is, when you are a Succubus, and you see the world differently, how does that change who you are and how you relate to your own family?

Janine has placed her trust in Katrina, the one who turned her into a succubus, and her new neighbor hasn’t disappointed. She has taught Janine much, especially to listen to her desires, and not to fear them.

But even as Janine revels in her new experiences, things seem to only grow more tense between her and Megan. Should she continue to put her faith in Katrina, or are there desires that she simply cannot give in to?

There is, when you think about it, a different view of the world through the eyes of a Succubus. It is that understanding that Janine has to face that becomes the core of this part of her story. While Katrina, and a few surprise “guests” have long before gotten past the ideals and limits of their humanity, Janine has not done so. There are certain things which give her pause, and force her to realize that things are not how they were not just for herself, but also for her husband and more importantly between her and Megan.

There is a tension, a feeling of not knowing their way that follows both of them throughout this story. If it was just the tensions they had it would be interesting to see where the story goes. but there are others that interfere, push and tempt both Janine and Megan to discover what each of them wants, and how to live with themselves in order to satisfy that need.

Janine’s personality continues to change in this part of her story, her needs now tending to guide her actions and in this comes the friction between herself and Megan. The moments that happen between them throughout this work feel right for each of them and the resolution of that, the need to if not completely understand each other but accept each other, brings what I felt was a satisfying closure to this part of their story.

Watching Janine learning to use her powers, to sharpen her abilities, to become more of a Succubus than she was brought some questions that I wondered about throughout the story. The main one being, being oversexed is one thing, and of course the Succubi in this series have their needs, but does that need control them or do they control it?

I think that depends very much upon which character you consider, but that little piece of humanity within Janine I think makes her story far more interesting than it otherwise would be. If she had “just” become like the other Succubi in the story I think I would have been disappointed in her. But she does not do so and there is where the story becomes a story and not just erotica.

There are many wonderfully hot scenes and they are quite well described and the results of those moments aren’t simply forgotten. They matter, they have an effect on the characters and in doing so the work as a whole is much stronger for that. There is a moment between Janine and Megan in which they “see” each other finally. Where the secrets of each are laid bare. I think it was the most powerful moment in the entire series considering where both of them had begun.

There are other places for Janine’s story to go, some of them I do wonder about and with what happens to Megan in the story I wonder about her and the Succubi as well… I just think it is an interesting open path. As well, Janine has far to go in her own transformation and the next step in that will be interesting to see.

The story is better when there is purpose and characters find out more about themselves… I am especially pleased that this has happened here most of all… But in doing so, in introducing a specific new character to the mix, there are some questions left unanswered about the Succubi and how their needs are satisfied… I would like to see more about that sometime…

My thanks to Jane for her gift of this work, and I hope there will be more someday soon…

I for one, will be watching…