What is a Huggle?

A Review of Bound by The Daughters of Lilith by J. Anthony Towner 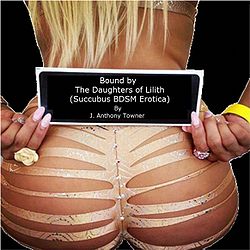 Bound by The Daughters of Lilith by J. Anthony Towner

Josh is getting married, his fiancé doesn’t like the idea of a stag party because she wants him to remain true to her, so his friend tells him he knows someone that can summon a Succubus for him and he can have a good time in his dreams and she’ll never know.

As a story idea, that actually isn’t a bad one, the problem here is the telling of the story in more ways than one. The story tries to be a hot flash, but it really doesn’t get to be one. There are a lot of spelling errors, a lot of moments where the speech seems very rote, the grammar is very ugly sometimes as well.

I also have problems with the ending of the story that feels wrong. I won’t spoil it, but, really, it just makes the entire story to that point meaningless and that’s a shame. It could have been much better and more interesting if there was some character development, some story telling, but most of all, some care taken to fix all of the errors in this work before it was published.

Needs a huge amount of editing and spell checking. Not that hot for me personally either for all of the errors in it. So, honestly, nothing to see here if you are looking for Succubi…