A Review of Night Machines by Kia Heavey 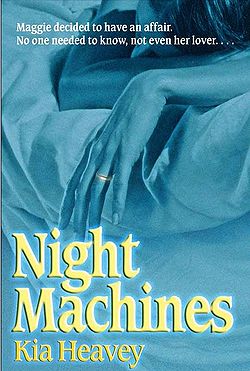 Something that I have thoughts about is mixing the supernatural world and the scientific one. If that can be done well, that would be interesting to read. It can be, and should be I think. I found a work that has an Incubus appear in it and I had hopes for it, but honestly I don’t think it came together as I thought it might.

Maggie decided to have an affair. No one needed to know. Not even her lover.

Who would it hurt, if Maggie decided to carry on a torrid affair in her mind? It would soothe her feelings, hurt by her husband’s emotional abandonment while he worked on a disturbing new murder case. It would provide an outlet for the dizzying desire she felt for her employer. It would make her feel loved and appreciated and better able to be a good wife and mother. After all, it’s not really cheating if it’s only a fantasy. Right?

But Maggie loses control of the fantasy as lust becomes love, and things she believed confined to her own imagination are somehow known to her spectral lover. A harmless mind game spins out of control and threatens the sanctity of Maggie’s greatest treasure – her family.

I really had problems reading this work for a few different reasons. I think the main one was that I never really felt any connection to Maggie or her family, her situation, or for that matter anyone else in the story.

There were one or two moments in the story that were interesting and made me think about things, but otherwise this was more a mental game than anything else and even when the Incubus is revealed, it is unsatisfying to me.

I won’t spoil the story, who the Incubus is, or anything similar, but I have a few thoughts otherwise. The main one is that there is a lot of characters that spend most of their time monologuing internally. That bothered me because it went on for pages and pages, then short scene, and then more monologuing. I know that the forces behind the characters need to be explained. but sometimes actions really are more and I think in the case of this work that’s very true.

I also want to say that having one of your characters named in such a way that it is blatantly obvious that they are the Incubus of the story from the first moment we see them kind of removes a lot of mystery from the story as well.

It’s also a little disappointing when the Incubus of the story… isn’t. It’s one thing to be “evil” and another to do evil. While he does evil things, it is impossible for him to bring himself to see the evil that he does for his overwhelming desires. What is more striking is that when the truths are revealed about him… it’s too fast. The climax of the story and its resolution are much too fast and too pat for my liking.

I think I would have been happier if there was more thought given to that and the aftermath than what we are given here. While the story’s loose ends are tied up and everything is neatly put away, it feels wrong by the time that happens.

I think that my main difficulty in all of this is that, really, none of the characters held my attention. There was so much to dislike in all of them that I couldn’t invest myself in the story. Perhaps tightening up the story some would have helped, or reducing the internal dialog might have as well. Either way it was hard to read and I was pulled out of the story a lot which bothered me as well.

Really didn’t do much for me, mostly because I just couldn’t bring myself to care about anyone in the story.