A Review of The Sex Demon by M.G. Morgan 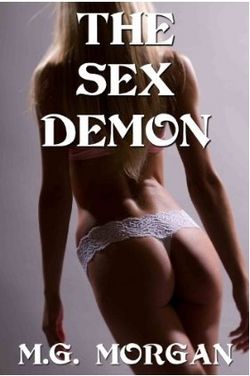 The Sex Demon by M.G. Morgan

Story means everything. It is the story that makes you want to see what happens next. It is the story that takes you from the beginning to the end. But, if you have two characters, one a Succubus that is more than you expected, and her pray, who turns out to be so much more… that’s a book I will read over and over again.

Her cock-pleasing adventures lead her to find the one man who can fully satisfy her.

The first thing I need to say is that the summary of this work is not really a fair description. Oh there is some very hot sex, there is no doubt about that, but unlike a hot flash, this work has characters with a history, a story to be told, and a resolution that is just wonderfully sprung onto the reader. I won’t ruin the reveal in the story, but when it comes it made a lot of sense, but more importantly, it answered some questions about the main characters that satisfied me.

Sasha, the Succubus of the story has some traditional powers and abilities that are seen in many Succubus stories, but some that I didn’t care for. I didn’t like that her teeth were sharp and pointed like a vampire’s, but the description of her otherwise is deliciously Succubus-like. The descriptions of her powers being tied to darkness and shadow painted a lovely picture and she became a very real person in that to me.

Her “victim” and you will have to read the story to understand why I have quotation marks around that, is… well, if Sasha is the perfect woman, than he is the perfect man, and that means a lot as the story progresses. There are secrets held within him and there are hints of what they are until the big reveal at the end of the story.

And that reveal, well it took a story that could have been very dark and sad into something very hopeful and wonderful for me. Really, that’s the one thing I look for in a story and I was very pleased to see it in this one.

The erotica is very hot, very much so. Sasha is really one of the best Succubi that I have read in some time, but it wasn’t just how she played her prey, the descriptions of the moments they share, or even the climax of the story which moved in a direction that I didn’t expect. It was that the story focused on the moments, the feelings, the emotions.

That makes this very special.

Obviously it is really well written and told, I have but one regret and that is the story is too short for all of the promise in it. Especially when the reveal is made about who the man Sasha has encountered is, what that means, and what it transforms her future from.

I so very much wanted a longer story about these two. I wanted to know their past and their future. If I am very, very lucky there will be a second story about them, but regrettably, it probably will never happen…