Succubi Image of the Week 286

A Review of Succubus Psychology by Jacques Desmond 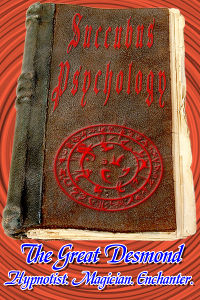 Reality is what you make of it. That is true not just of beings who are immortal, like Succubi are. That’s true of the not so simple mortals that find themselves wanting to change their own realties for something more than they are.

But what if, just if, both sides could learn more about themselves than they ever could have imagined? What if a choice is made, a path taken, that transforms them both into something more than they were expected to be?

Isn’t that where fantasy and reality meet? Isn’t that were the truths of one’s own self come to pass?

When student Cindi summoned a succubus for advice about her love life, she didn’t expect to receive a crash course in Succubus Psychology.

When succubus Sophie was summoned, she didn’t expect to be trapped within Cindi because of an emergency possession.

When both were put together and were forced to put up with each other, each discovered some truths about themselves and each other and were transformed as a result.

Cindi is… well… She’s somewhat lost. She cannot see the inherent beauty within herself. She’s smart, she manages to do something that really had never been done before. Summon a Succubus to do her bidding. Thing is that something goes a little bit wrong in the details and she finds herself with a Succubus within herself that is as smart as she is.

Sophie as a Succubus isn’t stereotypical by any means. She’s smart, funny, has a flair for the dramatic but most of all… She honestly cares about Cindi and wants to help her. Now, that of course involves a bit of Succubus magic and desires, but what’s most important above all else is that she wants to do the best she can.

That’s something not often seen in stories about Succubi. They are seen as evil beings with only destruction on their minds and that’s not Sophie. She’s better than that. So much so that she reveals things about herself that in turn give Cindi a chance to return the favour.

There is a delicious mix of sensuality both in what happens to Cindi, but also in how her new found abilities, including mind control and other interesting changes in herself and the immediate world around her. It isn’t silly mind control. There is purpose to it, there is lovely imagery in how both she and Sophie get what they want to survive.

What makes me happy is that there is real emotion between Sophie and Cindi. There is a connection between them that grows and transforms the two taking them towards something I didn’t expect at the beginning of the story.

There is a truth for both of them that is realized as the story continues. That truth is they are both more than they give themselves credit for or can bring themselves to believe is true about themselves. It is, after all, the hardest thing to do when it comes to believing in one’s self.

The ending is just right in so many ways. What happens is right for both of them, there is closure to many of the questions that were posed at the beginning. But as well there is an open  door and question at the end of the work that I would really like to see explored…

Heat in the right moments, passion in the right places, and two characters that while they inhabit a single body are two clear personalities. It is that mix of their personalities that drives the story forwards and it is something that I love to see happen and when it does…

I would have loved to see what happens after the end of the story… Because it goes to a place that really fascinates me in so many ways… That is a very minor quibble I admit, but then I always want to see so much more of the Succubi that I so dearly love…

In this work, there are…

I’d like to thank the author for sharing their work with me. It was truly a joy to read from the first page and I will always treasure being able to do so…