Succubi Image of the Week 285

A Review of Dream Stalkers by Parker Heimann 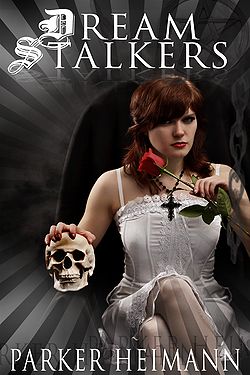 Occasionally there is a twist in a story. Now that’s not a bad thing, if it is done well and you didn’t expect what it turns out to be. Still, the problem with twisting a story is that you occasionally fall into the trap of the trope.

With Succubi, of course, there seems to be one or two that most writers pick up on for obvious reasons. However, if they can think of a twist that actually makes the story better in some way, shape or form?

That’s what I look for… Sometimes I am lucky enough to see it.

The book’s summary tells of:

Greg has insomnia. Whatever is keeping him up at night is starting to wear him down. He’s not the kind of guy who can get by on just his charm alone; he actually has to work for it. He certainly can’t afford to lose any ground just because he can’t sleep. After three days of this he is finally able to drift off.

As he is falling asleep, he is visited by a succubus who climbs on top of him and begins to immediately seduce him. She tells him that succubae are not bad, they are just creatures of pleasure. Surely he should be able to understand that and not be afraid. He’s not afraid, he’s just a little overwhelmed. She doesn’t give him a chance to slow down; she just takes what she wants, and what she wants now is to give a taste of him to her sisters.

Greg can’t sleep and a Succubus finds him and makes sure, with her sisters, that he will get to sleep. But there is a cost, there always is. In more ways than one.

Overall it’s not a horrible story about Succubi. They do not have horns or tails that are shown in the story and while they aren’t traditional really in anyway, their motives are and what they do to Greg through the story is very Succubus like.

The problem is that while they are Succubi, they are really nothing more than sex toys in this story once their victim cannot move or resist them. Then they take what they will, leave the remains and think about their next meal.

Which is a problem because there are hints at the end of the story about what they normally do, that each of them has a different personality and goals as well. But we never get to see any of that for all of the moaning that goes on…

Yes, it is an erotica story so plot and so on isn’t so important, but it can add to the story and make it better. This story had so many doors open to more of that but they were never taken.

Which then brings me to what bothers me. Five pages. The total work is 12, but really is it only five pages long. I don’t understand why there has to be so much padding in so many eBooks that are published now. Unless of course you are paid by the page, which I don’t believe. Still, the book is sold by the word count, 3,000 words more or less and that puts this work into the hot flash category.

It has some heat in it, the twist kills a lot of that, which I kind of expected to be honest. But when the Succubi are feeding at first and through most of the story? There’s a good deal of heat to be found… But… Nothing like it should have been.

I also found that some of the spoken parts of the story seemed a bit stilted, perhaps it was the choice of words more than anything else… I would expect Succubi to be more… seductive.

I’m giving this work two and three quarter pitchforks out of five.

Yet another much too short story with interesting Succubi in it that we learn nothing about save that they are very good at what they do whether they are good or not. Shame really because there’s more in them than we see…